One-Member, One-Vote: A Way for Primary Elections in Ghana [Part 1] 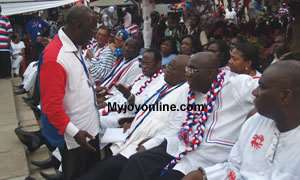 If OMO is the name of a famous laundry detergent and V is the first letter in VOTE then it is time for Ghana's political parties, especially the NPP, to consider washing up our presidential and parliamentary primary systems by shifting from the “DELEGATE” method to One Member, One Vote (OMOV). One-Member, One-Vote is a system whereby all members in good standing of a party are eligible to vote in declared elections. In the extreme case, as in the US, all one needs to do is to declare one's party affiliation during voter registration. In contrast, the “delegate” system as currently practiced in Ghana allows voting for presidential and parliamentary contestants in the primaries to be done by a much smaller number of people chosen by criteria that may be well-understood and accepted; or changing and always subject to confusion. The method of conducting general elections in Ghana at the presidential and parliamentary levels has won much praise from the rest of the world. We know it is far from perfect but it has been praiseworthy. It operates in the environment of ONE MAN, ONE VOTE versus a few thousand people choosing the country's President and Members of Parliament.

If One Man/Woman, One Vote is good enough for the general presidential and parliamentary elections where all parties contest for one position per seat, why is it not good to be used by the political parties to elect their candidates in their primaries? This is actually the conclusion of this article. Think about it.

The two major arguments against bringing OMOV to the level of presidential, parliamentary and even party leadership elections are:1) one cannot control who is a true MEMBER of a particular party therefore the opposing party will infiltrate, pay the required dues and vote for the weakest candidate.; and 2) It would be too expensive. Whereas the country finances the general elections it is not so at the party primary level and the parties are poor already. Both are valid concerns but answers must be found because they will open up the same parties to be a lot more democratic, transparent and richer. They will do this by building membership; raising money from its members; and consequently self-generating the funds for the party's sustenance, elections and campaigns. We must make an honest effort to find answers because the alternative is simply putting bandages on a cancer that will eat the party away because of corruption, lack of accountability, impositions and open rebellion. A good activity that is difficult to accomplish should not give way to comfortable but doomed expediency.

Some would say that the seeds of NPP's loss in December 2008 were sown in the fertile soil of the party's primary system that began with 17 people vying to be the party's presidential flag bearer in 2007. Later this was compounded by meddlesome machinations in NPP's parliamentary candidate selection processes that led the party to also lose its parliamentary majority in December 2008. Since this article focuses on OMOV, we would say that one common element of both the NPP presidential and parliamentary melt-downs is that the “DELEGATE” system was a poor reflection of the eventual voting patterns. A paid “delegate” is not a voting delegate (at least not for the paying aspirant) and a voting “delegate” is not a representative voter. As they say in the computer world- the system was corrupted- figuratively and literally. But what do you do with a corrupted file? You clean it up by either finding the cause of the corruption or you shut it down and install a new system. Most of the time, much as you try, a corrupted system will not work and may even lead to the entire machinery crashing and taking more valuable assets down with it. Pay attention- NDC/CPP/PNC- you are not immune to a system's crash.

Let us try the approach of isolating the problem first. In this scenario, the argument will be that 3,000 delegates electing a party's presidential candidate as in the NPP 2007 example are too easy to identify and attempt to influence by “gifts.” Therefore we should significantly increase that number perhaps by a factor of 100 to make it more difficult for anyone to “shop and buy” votes. Three hundred thousand for the NPP is a big number, agreed, but why stop there? Why simply make it difficult? Shouldn't the goal be to make it nearly IMPOSSIBLE? The statisticians prefer “IMPROBABLE” and that will do as well. It is more improbable to “shop and buy” votes from four million than from 300,000 (7.5% of the possible party members who would vote in an OMOV primary for a major party like the NPP/NDC). Add the sense of involving almost all your members in the decision-making process and thereby getting a fair gauge of the eventual contest and OMOV beats any measure of a delegate system any time, any day, anywhere. OMOV will awaken the party that is bold to try it first in Ghana and they shall be handsomely rewarded.

The cost? How would a primary be financed at the national level? If you take out unnecessary excesses, I dare say that it would not cost more than two million US dollars to finance any party's primary election in Ghana. I am not counting the candidates' expenses. So where does this money come from? Aha!- Now there is work for the party's executives- raise the money through enforced dues from the members- organize, mobilize, recruit, sign up, build databases to track the members, collect dues, and deliver portable and incorruptible membership cards. Simply put, do the work that a political party is supposed to do and all things shall be added unto you. Politics is about People and Money. The party that focuses on these two elements in an organized and transparent manner would win most of the time. If you want proof, ask Barack Obama. OMOV forces discipline, staying in touch with prospective voters and feeling accountable to them.

But wait- there is this nagging question- a change to OMOV necessitates a change in a party's constitution which must be approved by the same delegates. Why will they do away with their “good thing”? The answer to this is in the question. If a person is more committed to their “good thing” they are not for the “party's good” and if they are for the “party's good” logic will prevail and they will see the value of the “greater good.” To “chop” today only to see your party lose tomorrow does not make much sense and should not even be tolerated as an excuse to retard the implementation of OMOV, particularly for the NPP. Ghana's parties will not be the first to switch from a delegate system to OMOV for their primaries. The major parties in Britain- Labor and Tory have done so and the Queen is still in Buckingham palace. The sky did not fall so once again I beg my people to not rush to tinker with what we all know needs to change and give in to the same kind of system that brought a refreshing unknown to lead the US at a time of severe crisis- Barack Obama. I can confidently say that there is no way President Obama would have emerged under a delegate tradition- and what a loss it would have been to the world. Expunge fear and boldly embrace change. NPP take the lead and show the way to OMOV! Give power to the people and they will give it back to you, take it from then, and they will take it from you. One Member, One Vote is the Way!

In Part 2 we shall look at the mechanics of implementing OMOV that will include safeguards, harmonization among political parties and cooperation from the Electoral Commissioner. We shall continue this discussion at the 2nd NPP International Conference in Denver, Colorado (USA) on May 29-30, 2009.