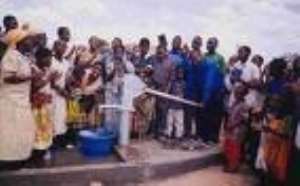 The Church of Christ Rural Water Development Project (CoCRWDP), would drill 70 wells in guinea-worm endemic areas throughout the country this year.

Mr Nathaniel Nii Sasah Adams, Chief Executive Officer (CEO) of CoCRWDP, who disclosed this in an interview with the Ghana News Agency at Ashaiman on Friday when he threw light on the objectives of the project, said the same number of broken down boreholes would be rehabilitated.

He indicated that the vision of the project was to provide water for needy communities nationwide, especially those in deprived areas and to ensure quality human development.

Mr Adams said the strategic goal of the project was to promote and eradicate water-borne diseases, especially guinea worm and diarrhoea in endemic communities.

He explained that while CoCRWDP was committed to poverty eradication and sustainable development, it aimed at providing integrated water with hygiene focused services using participatory approaches and evangelization to address the needs of deprived communities and society in general.

Recounting the achievements of the project, Mr Adams indicated that since its inception in 1989, CoCRWDP had drilled a total of 997 wells, out of which 545 being wet wells fitted with hand pumps. He added that about 345 communities throughout the country have benefited from the project services.

He said the facilities now serve about 152,000 people with potable water, while over 289 pump mechanics, pump caretakers and hygiene workers, had been trained to serve the beneficiary communities.

The CEO noted with satisfaction that the project was adjudged the best NGO collaborator in Water and Sanitation in the Northern Region in the year 2000.

Asked what had been the desired impact of CoCRWDP, Mr Adams stated that apart from drastically reducing guinea worm cases in most endemic communities, especially in the Northern Region, the project had reduced the time spent and distance covered by the vulnerable in search of water.

He added that it had increased availability of water for economic and social activities, thus improving the living standards of the beneficiaries.

Recalling the historical background of the project, the CEO said in 1987, while in Wenchiki in the Saboba-Chereponi District of the Northern Region for evangelism, Mr Josiah Tilton from the Church of Christ in the United States, together with some Ghanaian members became overwhelmed and touched by the guinea worm situation in the area.

Over 50 per cent of the inhabitants in the community at that time, he said, were infested with the disease.

Mr Adams said when they sought for the curative medicine for the victims they were surprised to learn that the disease could only be prevented with the provision of potable water.

He said this resulted in the establishment of the CoCRWDP in Ghana by the Traverse City Church of Christ in Michigan, with support from other congregation in the US in 1989.

The intervention, the CEO said, continued and in the year 2000, sponsorship was transferred to the International Health Care Foundation in the US city of Searcy, Arkansas.

He stated, however, that since 2003, the project had entered into partnership with other local and international NGOs, as well as donors, in order to meet the water and sanitation needs of the affected communities.

Mr Adams said the rehabilitation of broken down boreholes was very expensive, and therefore advised beneficiary communities to take good care of the facilities, in order to prolong their life span.