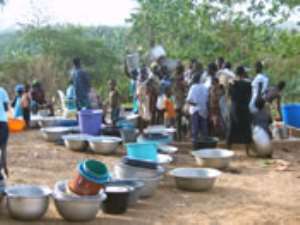 
Mr. Albert Abongo, Minister-designate for Water Resources, Works and Housing, on Monday said if given the nod, he would look into the operations of Aqua Vitens Rand Limited (AVRL), operators of the urban water systems, to determine whether to abrogate or continue with their contract.

Mr. Abongo, who is also the NDC MP for Bongo, told the Appointments Committee of Parliament during his vetting that public complains about the supposed abysmal performance of AVRL had come to his notice but he had to study the situation before taking any decision.

AVRL was competitively awarded a World Bank sponsored five-year management contract in June 2005 to serve as Operators of the urban water system on behalf of Ghana Water Company Limited (GWCL).

The terms of the contract mandated them to improve the commercial viability of the sector and also to assist GWCL in making treated water accessible to a wider population.

In that capacity, AVRL was to collect water revenue, use part of it to maintain the system and hand over the profits to GWCL, whiles capital investment and major procurement still remained in the purview of GWCL.

Since the AVRL contract was signed, several pressure groups and individuals have criticised it as a water privatisation move and indeed called the performance of the company into question.

The Minister-designate said he was aware that AVRL was brought in to manage and improve water delivery and revenue generation of the urban water sector, adding, “I am not in the position to say if they are doing well or not.”

He said based on the concerns raised about the performance of the company in the public domain, he would do a technical and financial assessment of their performance to determine whether to continue with or abrogate their contract.

“We will continue with the contract if we find their performance viable but we will consider a review if necessary,” he said.

Mr. Abongo also assured the Committee that the Ministry would verify allegations that all of the Engineers of AVRL had abandoned the districts and relocated to Accra.

He assured the committee that if given the nod he would streamline the affordable housing distribution process to ensure some sanity and fairness prevailed.

Mr. Abongo also took note of between 11 kilometres to 15 kilometres loss of coastal land every year to the sea in various coastal communities and assured the Committee that he would initiate measures to forestall the problem.

Mr. Mark Woyongo, Minister-Designate for the Upper East Region was earlier vetted, after two postponements of his vetting last week based on uncertainties around his voters' registration and some communication equipment he imported into the country.

Mr. Edward Doe Adjaho, Chairman of the committee presented two separate documentary proofs from the Electoral Commission and the Ghana Broadcasting Corporation, both of which cleared the air in favour of the nominee.

He was therefore subjected to about one hour of vetting, during which he assured the committee that given the nod, he would assist all the conflict mediating groups in the region to bring lasting peace to the region.

Mr. Woyongo also said he would help provide jobs for the youth in the area to prevent them from getting involved in conflicts in their idleness.