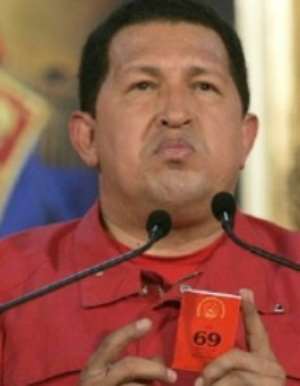 
Venezuelans have voted to lift limits on terms in office for elected officials, allowing President Hugo Chavez to stand for re-election.

With 94% of votes counted, 54% backed an end to term limits, a National Electoral Council official said.

Mr Chavez has said he needs to stay in office beyond the end of his second term in 2012 so he can secure what he calls Venezuela's socialist revolution.

Critics say that would concentrate too much power in the presidency.

"The doors of the future are wide open," Mr Chavez was quoted by the Associated Press news agency as shouting from the balcony of his Miraflores palace after the results were announced.

"In 2012 there will be presidential elections, and unless God decides otherwise, unless the people decide otherwise, this soldier is already a candidate."

Crowds of the president's supporters filled in the streets, letting off fireworks, waving red flags and honking car horns.

'Revolution saved'
The BBC's Will Grant in the Venezuelan capital, Caracas, says this was the kind of strong confirmation of his socialist agenda at the polls that Mr Chavez had been seeking.

"This victory saved the revolution," said Gonzalo Mosqueda, a 60-year-old shopkeeper, sipping rum from a plastic cup outside the palace.

"Without it everything would be at risk - all the social programs, and everything he [Chavez] has done for the poor," he told AP.

More than 11 million voters out of almost 17 million who were eligible took part in Sunday's referendum, said the head of the electoral body, Tibisay Lucena.

International observers said the ballot was free and fair, and opposition leaders were quoted as saying they would not contest the vote.

Even so, opposition leader Leopoldo Lopez told the BBC's Newshour programme earlier on Sunday that the campaign had been heavily weighted towards Mr Chavez.

"In 10 years we have had 15 elections, 15, and this has been the most unequal, the most abusive campaign of all.

"So that's why you are seeing more propaganda, more campaigning, more advertisement for the 'yes' vote."

Challenges ahead
Under existing constitutional rules, the president was limited to two six-year terms in office, which meant that Mr Chavez would have had to leave the presidency in three years' time.

A proposal to end presidential term limits was one of a package of 69 constitutional changes narrowly rejected in a referendum in late 2007.

The president now faces the daunting task of grappling with the global economic crisis in a country dependent on oil exports, our correspondent says.

Venezuela has the highest inflation in Latin America, he says, and there are serious domestic problems such as violent crime that Mr Chavez will need to tackle in the next four years if he is to repeat his success in the presidential elections of 2012.