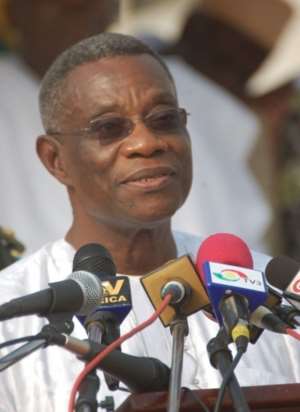 We have always suspected the complicity of the new administration led by John Evans Atta Mills in the outrageous and “thievery” package approved under the cover of the night for the “pigs” who ruled the farm, oh yes, the animal farm called Ghana, because of the action or inaction of the new government on the issue!

Since the announcement of the “Nicodemus” package (it was speedily approved by parliament under the cover of night; we are not sure which president signed to make it lawful), Ghanaians across all spectrums of life and political affiliation has condemned the package excerpt the new president, John Evans Atta Mills , his Vice-President, John Mahama and the architect of the package former president John Agyekum Kufour.

President Mills has been stone silent on the despicable issue! At the time of this write-up, Mills has not issued any condemnation or at least assured Ghanaians that he will reexamine the issue and if the law permits revoke it and put in place a more acceptable retirement package.

Today, almost one month after the atrocious package was approved by parliament, we are being told that an appointee of president Mills , Moses Asaga has approved the disbursement of the initial 20 million US dollars of the outrageous benefits!

The questions we ask are:

We voted for Atta Mills to lead and make hard and good choices; and also uphold justice on behalf of the good people of Ghana. We least expected that he would not stand up against the status quo! We least expected that he would crawl in his shell in the face of such thievery meted out on the good people of Ghana by the NPP and worse of all use his, Mills, surrogates to complete the act of the perpetrators! An act we strongly feel benefits Mills in the future hence his silence and use of his surrogates to complete the shameful deal!

Ghanaians are sick and tired of politics as usual that was why they replaced the arrogant and corrupt NPP with the NDC but as we can see now, the NDC is quickly metamorphosing into the same colors that sent them into opposition 8 years ago…insensitive to the will and wishes of the good people of Ghana!

At a time the whole world is plunging into the largest financial meltdown ever known to mankind, and no one is sure of how much this global catastrophe will affect or lead us to , why should we shower this opulence on our past leaders when majority of the people who elected these politicians are wallowing in abject poverty and are fervidly against it!

News from our dear country is filled with heart wrenching stories.

Poverty is preventing people of Asante Akim South from pursing justice, poverty preventing people from eating a square meal a day. Malaria is killing a Ghanaian child every minute but Ghanaians cannot afford a $10 mosquito net that could save their lives! HIV/AIDS kills one Ghanaian every I hour because majority of the patients cannot afford retroviral medications to make them live a better and productive life. Thousands of Ghanaians sleep at the railway stations across the country, and millions sleep on streets, classrooms and anywhere. Parents cannot afford to take their children to school because it's too expensive whereas a good scholarship can see a child in the village through college. Our roads are death traps. Farmers, fishermen and workers barely make it to the end of the month. Our people cannot afford to drink good potable water. Our police officers do not have the necessary equipment to fight crime so armed robbers are having a field day in our country; freely roaming, killing and terrorizing our people!

Atta Mills and his cabinet must act fast to correct the injustice meted to Ghanaians under the cover of darkness and approved surreptitiously by his, Mills friends, for that is what they are elected to do!

We must be decisive in preventing domestic inequalities — Dr...
10 minutes ago