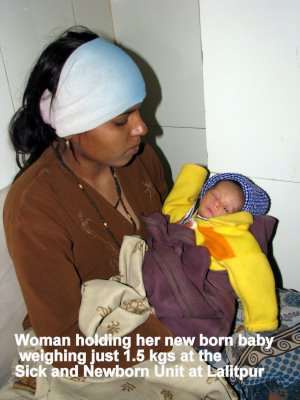 Lalitpur UP: The only emotion one feels standing in the neonatal care centre in Lalitpur is of disbelief, as doctors prepare to discharge a newly born baby weighing no less than 750 gms. Barely fitting the size of the doctor's palm, the little girl child is hale and hearty as she is handed over to her mother.

As one happy mother leaves the Special Care Neonatal Unit another waits as doctors fight to save her new born son with no heart beat. The joy on the woman's face as the baby starts breathing again with the monitors registering a tiny heart beat bears witness to the hope this neonatal unit is capable of giving parents of such children.

But then these are the miracles that one can witness at the Special Care Neonatal Unit (SCNU) which has been established and is functioning at District Hospital, Lalitpur in Uttar Pradesh by UNICEF.

A neonatal facility completed and funded by UNICEF in collaboration with Department of Health, Govt. of UP and National Rural Health Mission (NRHM), the SCNU all set to be an much needed answer to prevent rising neonatal complications and deaths at birth .

With technical support for the establishment of the unit provided by the National Neonatology Forum (NNF) the facility is equipped with state of the art lifesaving machines and which helps immediately provide emergency care right after birth if required.

Informs Dr HK Paliwal, District Health Nutrition Techinical Care Co-ordinator,"A 12 bedded facility the SCNU has 2 dedicated pediatricians who has been trained in essential newborn care including management of the feotus at birth and neonatal resuscitation. We also have 12 nurses provided exclusively for this unit, by GoUP and trained on Facility Based Newborn Care for handling and managing the neonates admitted in the unit."

The unit also has separate rooms for sterilization, washing and neonatal procedures and is equipped with essential machines for neonatal stabilization, management and resuscitation.

Explains Dr Raj Narayan, Senior Pediatrician, Distict Women's Hospital Lalitpur, under whose supervision the SCNU functions, "Most of these cases are classified as abortion cases but now they have a chance to survive thanks to the SCNU. Earlier the survival rate was zero but now out of ten cases almost 9 survive, which is an worthwhile effort."

Complicating matters were the poor health of the mother most of whom being underage and malnutrised could not carry the feotus full term. As a result most ended up delivering the child premature, underweight and severely affected by malnutrition. Clocking statistics placing Lalitpur as a district with the highest infant mortality rate.

But not anymore adds Dr Narayan, who was handpicked for the facility along with 12 staff nurses and 2 doctors,"These women also suffer from viral infections which remain undetected and affect the immune system making the mother weaker and unfit to carry a feotus full term. In addition to that most refuse to under go C-sections and insist on normal delivery even when it is dangerous for the child. All these factors had been contributing to the low infant mortality rate here in Lalitpur. But now with the SCNU right next to the labour room such babies can be stablised and helped immediately improving their chance of survival."

But can these children lead a normal life? "Of course," says, Dr Vikas Jain, Paedtrician, at the SCNU who was picked for this facility due to his rich experience in working with neonats in Indore,"If the feotus suffers from birth axsphysia and does not cry at birth being a forced delivery instead of a c-section, some quality of life is affected. But majority of the babies lead a healthy and normal life inspite of low birth weight and complications."

No doubt a successful project, this timely intervention to improve neonatal care and survival is now being looked at as much needed facility in other districts of UP as well.

Says Dr Gaurav Arya, "Based on the positive difference the SCNU at Lalitpur has been able to make UNICEF has been able to advocate for scaling up these facilities in 8 more districts immediately, through NRHM resources. These will then be scaled up all across the state in a phased manner, by the Government of Uttar Pradesh (GoUP). These units will go a long way in reducing the neonatal and infant mortality in the state. "

Anjali Singh
(The author is a senior journalist based in Lucknow, India. Email: [email protected] )