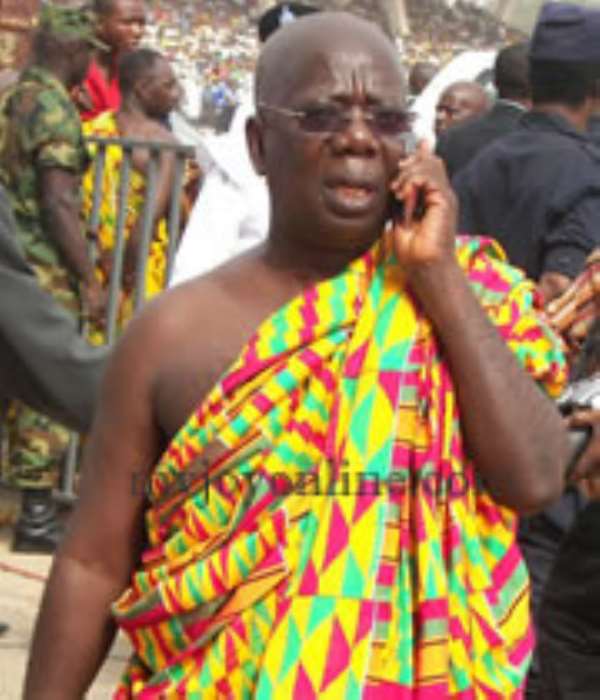 In July 2008, Mr Kwadwo Mpiani, the Chief of Staff at the Presidency in Mr Kufuor's New Patriotic Party (NPP) administration appeared before parliament to answer questions on the expenditure on the presidential palace and the [email protected] project respectively.

Mr Mpiani reluctantly appeared before parliament only after his brother-in-law, Dr Charles Yves Wereko-Brobbey, Chief Executive Officer (CEO) of the [email protected] celebrations refused to appear before the Legislators.

I remember very well how Mr Mpiani and his brother-in-law treated the people of Ghana with utter disdain. I can also vividly recollect describing Mr Mpiani in one of my pieces as 'the law'.

During the parliamentary show, Mr Mpiani was at his arrogant best. He showed the parliamentarians that they were mere 'nonentities' and to the taxpayers, he said 'you can only know the total expenditure on the presidential villa upon completion of the project'.

When Haruna Iddrisu, MP for Tamale South asked why it was not possible for the cost of the project to be determined beforehand, Mr Mpiani retorted, “Young man, you won't have it. After all, you are too young and you have never even built a house of your own so you don't know what it takes.”

I say this because it is a luxury expense that would not bring the Ghanaian taxpayer any returns. As a nation, we are rather going to be wasting more money on unnecessary renovations in the future.

Well, we are all now aware that although the presidential villa has not yet been completed the expenses on it so far have exceeded US$ 60 million.

As for the so-called [email protected] celebrations, we have been told that Mr Mpiani and his reckless expense savvy brother-in-law blew over US$78 million on it! In Ghanaian terms, this is almost a trillion cedis!

Sometime in 2008, a young woman who had just bought an M-class Mercedes Benz told me of how she netted a whopping US$1.0 million (one million dollars) for performing a very menial task for the [email protected] project! I can now appreciate why the young woman had cause to celebrate her bonanza!

All of us can now appreciate why the monies were spent on booze, cars, and the building of mansions – many of which have already been sold for a song to girl friends, family members and apologists of members of the previous regime.

When Wereko-Brobbey refused to appear before parliament to answer questions from the Ghanaian Legislators on his 'tax and waste' [email protected] project, he said he was not accountable to parliament!

But that is vintage Wereko-Brobbey for you. He was the same man who as CEO of the collapsing Volta River Authority (VRA) said that it was preferable buying luxury sports utility vehicles and other comfort range cars to fixing the collapsing energy grid.

It's clear that Mr Mpiani and Wereko-Brobbey have got a huge knack for frivolous extravagance! They are an epitome of the typical African public servant who believes that despite the worrying poverty situation around him, he must be treated like an Arabian King!

Now the tables have turned and Mr Mpiani who was once our overlord and could just shut anybody up a few weeks ago is jumping from one radio station to another, granting interviews. The strong septuagenarian is now granting unsolicited interviews! He is begging to talk to journalists! He said he has to be given the opportunity to respond to the claims made by the Auditor General, Mr Dua Agyemang! What a world?

A few weeks ago, Mr Mpiani and his in-law were so powerful that nobody dared question their extravagance or misbehaviour. They were so sure that their government was going to be in power for 50 years! Based on that false theory, they misapplied our taxes as long as it pleased them.

Well, if I can deduce anything from revelations made at the meeting between the Auditor-General and the new government's transitional team, I can only say that Mr Mpiani who was a virtual 'god' at the Osu Castle a few weeks ago has just given himself the hangman's noose! That is if the revelations are true – of course he claims that the report submitted to the committee was just an interim one.

All I can say is that interim reports give birth to final reports and to that extent, unless Mr Mpiani believes that there would be an opportunity for him to doctor some part or all of the report to suit his whims, he should pay for a reckless display of opulence and crass arrogance! Upon all the wasteful spending of our tax money, Mr Mpiani and his mates even had the audacity to constitute some banana committee to reward themselves with huge end of service benefits.

As I piece this article together, the hitherto all powerful Wereko-Brobbey, the man I knew to be very eloquent is granting an interview to Joy FM. He has virtually lost his eloquence! He has missed his rhythm. He is now speaking with a lisping stammering tongue!

My position is that we are a third world country. In fact, Mr Mpiani and his friends declared this country highly indebted and poor. So I least expected that sort of recklessness to have come from their quarters. I least expected their administration to treat the people with contempt, but I was wrong, ignorant arrogance was the lot of the people.

It's clear that Mr Mpiani was also drunk in the hallucination of the then ruling oligarchy that, the NPP government was going to be in power for half a century! That was why he and his kitchen cabinet friends and other apologists always acted with obtuse impunity. And of course, if you know that you were going to be in power for 50 odd years, you could decide to be incorrigibly reckless! You could behave 'anyhow' because you know that over time, you could be able to paper any cracks you would have made in the public till with your sticky fingers.

Mr Mpiani has given himself the hangman's noose. And when that happens, it's clear that nobody is leading him to the gallows! He should be allowed to hang! Any politician who also behaves like him in the future should know that just as the tables have turned when Mr Mpiani and his family-cabinet members least expected them to, could also be taken unawares!

Now, Mr Mpiani, you've been given less than a month by what you and your in-law, the ever powerful Tarzan, decided to call a kangaroo court to respond to all the findings in the audit report. And from the way I understand the operations of kangaroo courts, they can make you hang you know?

And since it's clear that you have decided to pick up your own noose, I just can't wait to see you hang! After all, you told those of us who wanted you to account for your stewardship of the two projects to go to hell!