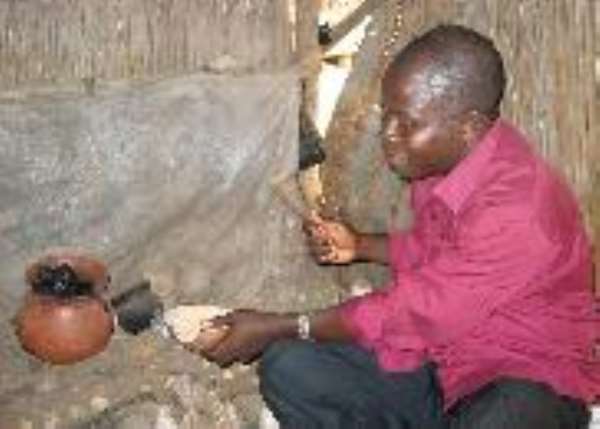 A 34-year self-styled fetish priest who claimed he could save a businessman from motor accidents and death and succeeded in collecting GH¢3,100 cedis from him but failed to do so appear before a Circuit Court in Accra on Friday charged with fraud.

Robert Mensah, who is also facing additional charge of conspiracy, pleaded not guilty.

He was admitted to bail in the sum GH¢2,000 with a surety to reappear on February 5.

The court, presided over Mr D.E.K. Dakatsey issued a bench warrant for the arrest of Abdul Nassir, aka Nana, an accomplice.

Chief Inspector Johnson K. Anim said on December 9, last year year, complainant Nana Donkor received a call from Mensah that some of his workers had planned to kill him spiritually and he being a fetish priest could help him.

Mensah further told the complainant that his enemies had planted a deity in his office and was going to direct him on what to do.

Mensah instructed him to burn the deity and also informed him that he had gone to consult a Mallam for assistance hence he needed GH¢600 cedis to pacify the gods.

The prosecutor said the complainant sent the money through the Ghana Commercial Bank (GCB) Adum branch to the accused person.

The prosecution said on January 20, this year, Mensah informed the complainant, who was then driving, that someone had planted an object in his car, hence he was going to crash. He should therefore get out from the car and walk round it.

To the complainant's surprise he found than an object had been placed in his car.

The complainant who became suspicious reported the matter to the police who informed him to send the money to Mensah so that they could arrest him whenever he appeared at the bank to receive it.

A witness in the matter went to the GCB Kejetia branch to withdraw the money and when the Police arrested him he said he was instructed by Nassir, now at large, to collect the money.

The Police, however, traced the number that was in communicating with the complainant and succeeded in arresting Mensah