Even before new congress date is announcedKUMASI DECLARES NANA UNOPPOSED 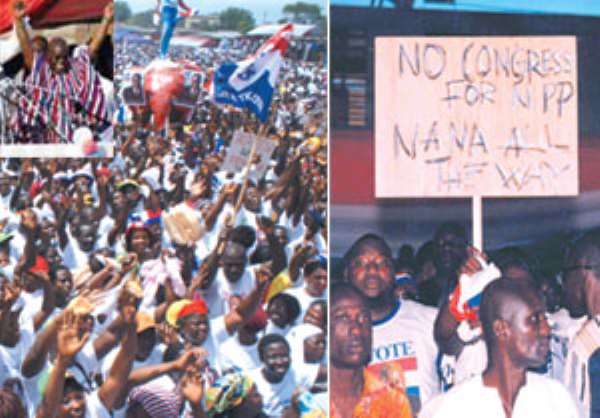 EVEN THOUGH it is early days yet for anybody to talk about who leads the party to the next general elections, supporters of the opposition New Patriotic Party (NPP) in the Ashanti Regional capital, Kumasi, have already sent early signals of their preference for the party's flag bearer in the just ended general elections, Nana Addo Dankwah Akufo Addo, to lead the party for the 2012 elections.

Supporters of the party in Kumasi have declared their intention to resist any attempt by the party's top hierarchy to organize congress, with the view of electing a new flag bearer in 2011 to contest the general elections to be held in 2012.

In what could be described as a hasty decision, considering the fact that the party is yet to perform an appraisal and a post mortem of the December 2008 elections, which it narrowly lost to the NDC, supporters of the party say they would prefer that the present status quo was maintained, in order to ensure some level of consistency in the leadership of the party, so that it can easily bounce back from its defeat in 2012.

Supporters of the party, on Monday, trooped to the Centre for National Culture in Kumasi to catch a glimpse of the party's Presidential candidate, who is currently embarking on a “Thank You” tour, and displayed various placards to indicate their preference for him.

Most of them were of the opinion that if the NDC saw the wisdom in maintaining the now elected President John Evans Attah Mills on three successive occasions, then there is no reason why the NPP cannot do a similar thing.

Others also reminded the party's hierarchy of the historical antecedent of former President Kufuor, who contested on two occasions before eventually winning the Presidency, by saying “Remember Kufuor went twice.”

Business in the Metropolis as usual came to a standstill as supporters painted the whole town with the red, blue and white colours of the party to welcome the flag bearer of the party.

When Nana Addo took his turn to address the supporters of the party, he urged that they remain resolute and united in the midst of the threats and intimidation from their opponents, since the battle ahead was bigger.

He said there was no time to point accusing fingers at each other or blame any group or individuals for the party's defeat, adding that “we need to stay focused and remain committed towards the affairs of the party, because we are definitely coming back in 2012.”

Nana Addo who is touring the country to thank the people has already visited Sunyani, Tamale and he is currently in the Upper West Region.