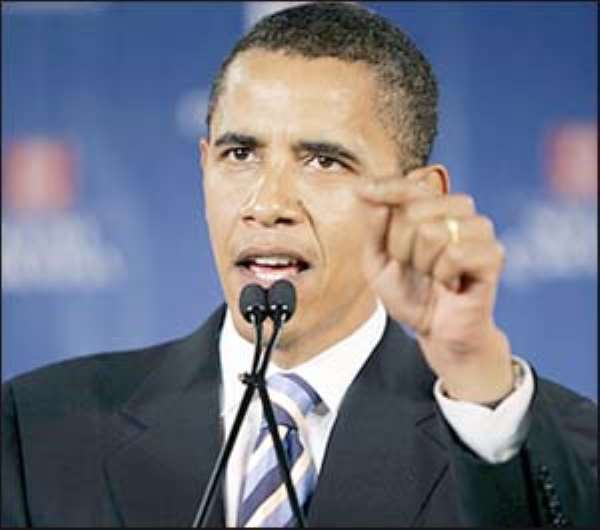 US President elect, Barack Obama THE sharp slowdown in the U.S. economy is expected to push the federal budget deficit to more than $1 trillion, the non-partisan Congressional Budget Office (CBO) has said in a report available to CITY&BUSINESS GUIDE.

The deficit of $1.186 trillion for the fiscal year ending September 30 would be the largest on record.

The projected deficit does not include the extra $800 billion spending being planned by U.S. President-elect, Barack Obama.

But it highlights the deep economic difficulties facing Obama when he is inaugurated on January 20.

The CBO says that the slowing economy will lead to the U.S. budget deficit more than doubling from last year's figure of $455 billion.

CBO said although the economy may recover by 2010, the deficit will still be more than $700 billion, and it projects an accumulated deficit of nearly $2 trillion over the next five years.

As a percentage of total economic output, the deficit will be 8.3 percent of GDP. The previous record was six percent of GDP set in 1983.

The major reason for the deficit is the sharp decline in tax revenues, projected to fall by 6.6 percent, as well as the increase in spending due to the cost of the recession and bail-out.

The size of the budget deficit makes the shape of Obama's stimulus package more of an issue.

Obama has described America's economy as “very sick” and has said that the situation is worsening.

“Potentially, we've got trillion-dollar deficits for years to come, even with the economic recovery that we are working on at this point,” he stated.

He has been urging Congressional leaders to back his stimulus package, which is expected to cost between $700 billion and $800 billion over two years and create up to three million jobs.

The plan would include about $300 billion in tax cuts, as well as additional spending on infrastructure and aid to the states.

The U.S. central bank, the Federal Reserve, has already cut interest rates to nearly zero in a bid to stimulate the economy.

But even former Republican economists, such as Martin Feldstein, who advised Ronald Reagan, now say that a fiscal stimulus is needed because of the dysfunctional credit markets.

Meanwhile, further signs of the weakening of the U.S. economy are likely this week.

Many economists are expecting the US jobless figure to rise by 500,000, bringing the total U.S. job losses for 2008 to about 2.5 million.

Obama will be under pressure to allocate further funds to bail out the auto industry, with GM and Chrysler both having received short-term funding from the government for the next three months.

The automakers say that up to three million jobs could be at risk if the industry goes under.

In addition, the budget deficit does not include some $350 billion in bail-out funds for the financial sector which have not been spent so far - half of the $700 billion package approved in October.

In the longer run, the government also faces sharply higher costs for social security retirement payments and health care, as the Baby Boomer generation retires over the next decade.