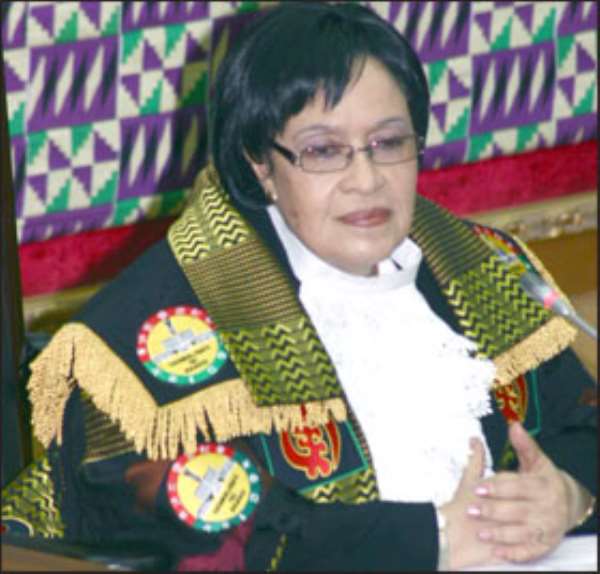 Rt. Hon. Joyce Bamford-Addo THE PEOPLE'S National Convention (PNC) Members of Parliament have made a u-turn in less than a month to join the National Democratic Congress (NDC) in parliament after declaring publicly to support the New Patriotic Party (NPP) and its presidential candidate, Nana Addo Dankwa Akufo-Addo.

Haruna Bayirga, MP for Sissala West, Moses Dani Baah, MP for Sissala East, and David Appasera, MP for Bolgatanga, then PNC Parliamentary candidates endorsed the candidature of Nana Akufo-Addo for the December 28 Presidential run-off election, citing concrete reasons why they and the PNC should not support the National Democratic Congress (NDC).

All three were part of the New Patriotic Party (NPP) majority side in the last Parliament with Hon. Moses Baah getting Deputy Ministerial positions in the first term of the NPP administration.

The MP for Sissala West, Hon. Bayirga the only person to have won his seat among the group of three on the December 7, 2008 Presidential and Parliamentary Elections has reportedly abandoned his pledge to be with the NPP by joining the now ruling NDC side in parliament with a colleague, leaving many tongues wagging about his political commitments.

Majority Leader and NDC MP for Nadowli West, Alban S.K. Bagbin was reported to have told the BBC yesterday that his party had written to the PNC for their MPs to join the side of the governing party in parliament and in return get ministerial positions.

According to Hon. Bagbin, the PNC wrote back accepting the offer, giving the NDC a Majority of 116 Members in 230-member parliament with two, Asutifi South and Akwatia constituency yet to be decided.

Hon. Bayirga confirmed to the DAILY GUIDE in an interview that the NDC had actually made some offers to the PNC, which the party had accepted including taking care of the family of the late Dr. Hilla Limann, a former president whose government was toppled on December 31, 1981 by ex-President Jerry John Rawlings, the founder of the NDC.

The Sissala West MP however pointed out that he was not privy to the details of the offers and therefore was not be able to confirm the full content of what the NDC was putting on the table.

According to him his initial decision was to be with the NPP based on certain strong principles and ideals.

However, the leadership of the PNC he disclosed told him in unambiguous terms that he was not in parliament because of himself but on the ticket and interest of the party, a stand he must not ignore.

In their commitment to support the NPP and its presidential candidate in the presidential run-off, Hon. Haruna Bayirga, Hon. Moses Dani Baah and Hon. David Appasera, at the time announced that aside the official endorsement of the NPP candidate they were going to embark on regional campaigns to ask their supporters to vote for Nana Addo.

The MPs also debunked an assertion that their decision was in contravention of the position of the leadership of the PNC to remain neutral in the run-off.

“If the PNC as a party wants to remain neutral that does not mean that we cannot go ahead to endorse a candidate we want to support, and it is not we the three MPs alone who are endorsing Nana Addo, we have a lot of regional chairmen, organizers and party faithful with us to support Nana Addo,” Haruna Bayirga had noted in his response to questions from journalists.

They explained then that though all the opposition parties campaigned for 'change' prior to the December 7 election, they “simply have not been convinced that the NDC offers the kind of change that will fast forward Ghana's development”.

They explained further that their decision to support the NPP was arrived at after a meticulous study of the visions of the NPP and the National Democratic Congress (NDC), an evaluation of the records of both parties in government, and a consideration of the historical relationship between the two parties and the PNC.