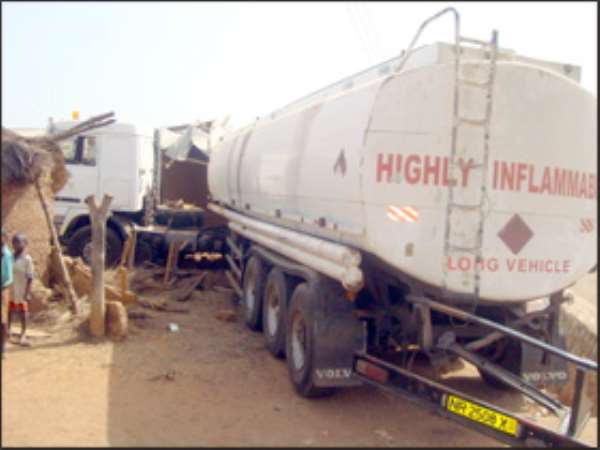 The tanker at the accident scene TWO PEOPLE including a farmer died on the spot at Gbimsi in the West Mamprusi District of the Northern Region, when a fuel tanker with registration number NR 2508X ran into them.

The dead were identified as Innusah Bagahari, a farmer and Tapkasi Samani, a food vendor.

According to an eyewitness, the vehicle which was Tamale-bound from Bolgatanga in the Upper East Region was obstructed on reaching the area by a 207 Benz bus.

A child of about 10 years from nowhere was reported to have also crossed the road and in the process of swerving the vehicle to save the life of the child, the driver of the tanker lost control and the vehicle veered off the road, killing the two instantly.

The Walewale District Police Commander, ASP Ernest Fosu who confirmed the incident to the DAILY GUIDE, said the driver of the vehicle whose identity was withheld for security reasons, had been detained pending investigations.

He also disclosed that the dead had already been taken to the hospital for autopsy and buried according to Islamic custom.

As at press time, owners of the vehicle were in talks with relatives of the deceased to find an amicable solution to the matter.