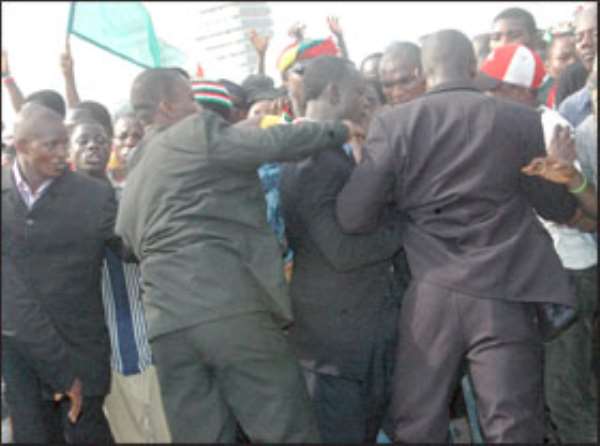 President Evans Atta Mills SECURITY arrangements at the swearing-in of Professor Evans Atta Mills, as the 3rd President of the 4th Republic of Ghana at the Independence Square in Accra went haywire and chaotic as the security agents looked on totally confused while NDC supporters virtually hijacked the ceremony.

Hundreds of thousands of National Democratic Congress (NDC) supporters and sympathizers who besieged the Independence Square to be part of the historic moment were let loose to do their own things in the face of both foreign and local dignitaries.

The programme which was billed to start at 1.00 p.m. could not start on time as the both presidential and vice-presidential convoys as well as vehicles carrying most of the dignitaries, including Members of Parliament and other invited guests could not easily make their way through the crowd.

DAILY GUIDE observed that the normal security checks and road blocks that usually characterized such programmes were conspicuously missing.

The roads from the Liberation Circle through the Military cemetery down to the Stadium and to the Independence Square were opened to normal traffic and the main entrance tothe ceremony ground was virtually taken over by people, commercial vehicles and other motorists, who competed with dignitaries who had to endure the discomfort in the traffic.

At the Independence Square, the security agents could not control the crowd as they kept surging forward eventually capturing the main parameters thereby blocking the views of most of the dignitaries who were seated.

When the ceremony was finally called to order by the Speaker of Parliament, Justice Mrs. Joyce Bamford-Addo, for the formal commencement, the MPs, who had taken their seats could not participate in the proceedings as the announcer appealed to the crowd to leave for the ceremony to begin.

That call could not deter the crowd as more of them kept surging forward until the situation went haywire.

Instead of taking care of the crowd, the security personnel turned their anger and frustration onto members of the press and started harassing them.

The intransigence of the crowd incurred some hard handedness from the security personnel as they meted out some beatings to them ostensibly to avert stampede.

Speaking to Deputy Commissioner of Police (DCOP), Patrick Timbillah, Director General, Operations at the Police Headquarters in Accra, he indicated that the magnitude of the crowd was least anticipated but was however quick to add that more of the personnel would be called in to beef up security at the place.

According to him, security measures were put in place, especially at the major roads and intersections to ensure free flow of traffic to make way for the presidential convoy and other dignitaries.

DCOP Timbillah however said initially the police decided to block some of the roads leading to the Independence Square but relaxed the decision to avoid being tagged 'against'.

He said some of the barricades had to be removed to make room for the crowd to avoid stampede.

DCOP Timbillah however gave the assurance that the police in collaboration with other security personnel would keep the place secured and make sure that everybody left the place peacefully.