Business At Standstill In Kumasi, Accra 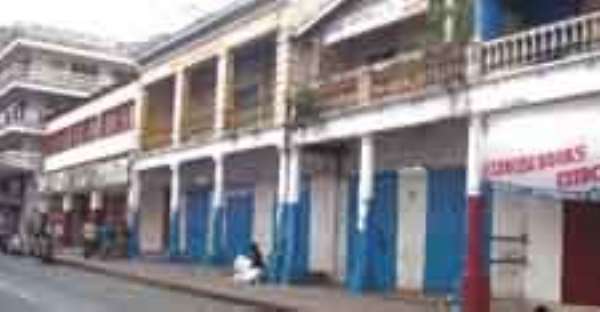 Brisk business at the central business district of Adum in the Kumasi metropolis yesterday came to an abrupt end in the afternoon ahead of the official declaration of results of the presidential run-off by the Electoral Commission.

Traders and shoppers started deserting the business district at midday and by 4pm; almost all shops in the area had been closed.

This followed tensions that had characterised the declaration of the election results following projections on some radio stations that the National Democratic Congress (NDC) had won the elections, which was later disputed by the leadership of the New Patriotic Party (NPP).

Some traders told the Daily Graphic that they had information that shop owners in Accra had closed their shops so they decided to do likewise.

Others said they feared for their lives since they were not sure of the outcome of the results and its subsequent reactions by supporters of the political parties, hence they decided to close their shops and go home.

By 4pm when the Daily Graphic toured the business district, there were only snippets of traders hanging around.

Many people were spotted rushing to the various lorry stations to board vehicles to their homes.

Workers of the central business district traffic management project responsible for the issuance of tickets for the paid parking system had all closed from work and were going home.

Some of them who spoke to the Daily Graphic said that since everybody was deserting the business district, they also decided to close work and go home, fearing for their lives.

Hitherto, business in the area boosted even on Christmas Day, December 25, Boxing Day December 26, as well as on Election Day on December 28.

In a related development, Naa Lamiley Bentil & Gifty Bamfo report that most workers and traders in the central business district (CBD) of Accra were yesterday gripped with apprehension and suspense 48 hours after Sunday's presidential run-off and hours before the Electoral Commission (EC) announced the results of the run-off.

Anxiety and tension filled the Ministries area, which was unusually quiet, and the Makola Market area as workers and traders engaged in discussions on the delay in the release of the results.

The apprehension, suspense and tension were as a result of claims by the two contesting political parties, the New Patriotic Party (NPP) and the National Democratic Congress (NDC), that they had each won the knife-edge run-off.

There were debates as to who won and whether the party deserved to win or there had been manipulation of figures.

By 11:15 a.m. yesterday some shops at the Makola Market were closing down for fear of reprisals and looting if the EC's announcement did not go down well with some people.

Another astonishing development at the market was the high demand for NDC paraphernalia as most NDC supporters believed they had won the election.

Most workers were not ready to engage in political discussions with 'strangers'.

What could be seen at the Ministries area, particularly around the Ministries of Local Government, Rural Development and Environment, Food and Agriculture, Health, Youth and Manpower and the Auditor-General's Department were the vehicles of civil servants and others that had been parked there.

The Deputy Public Relations Officer of the Ministry of Local Government, Rural Development and Environment, Mr Jonathan Aboagye, told the Daily Graphic that although a lot of people had reported for work that morning, not much work was going on because “most people are just waiting for the EC to announce the election results”.

He said people easily engaged others in political talk, saying that since he was not interested in discussing such issues, “I prefer to remain in my office”.

The situation at the Makola Market was no different, as most of the traders, hawkers and buyers were seen discussing the outcome of the election.

Some of them expressed fear that the declaration of the results might lead to chaos, which they prayed would not happen.

A second-hand clothes seller, Maame Ama, said, “Business today is very slow. Many people are not at the market today because they are scared something may happen after the declaration of results. I am even parking my stuff to go home.”

An onion seller who mentioned her name as Lizzy also expressed fear that the declaration of the results might lead to chaos.

Mr Stephen Nkansah, who said he was a supporter of the NPP, expressed regret that the NDC had declared itself the winner, without waiting for the results from the EC.

A shopkeeper who identified himself only as Sammy said his employer had asked him to close the shop for fear that there might be confusion after the declaration.

A shop owner, Mrs Adotey, said she closed her shop because she had heard rumours that some NDC supporters at the market were planning to protest should the EC declare the NPP winner of the election.