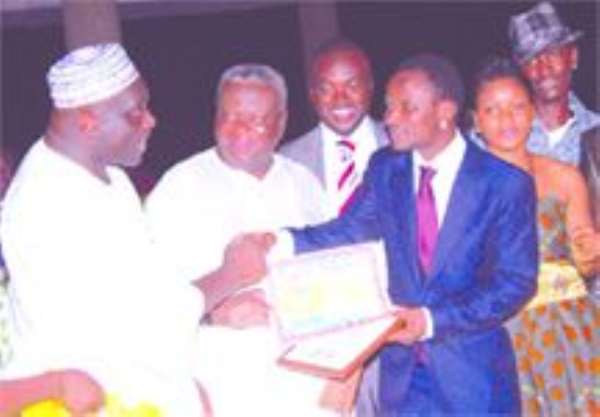 Newly-crowned Sports Writers Association of Ghana (SWAG) Sports Personality of the Year, Joseph Agbeko, has dedicated his award to a smooth election run-off on Sunday, December 28.

Agbeko said this in a brief speech after SWAG Patron, Mr Amarkai Amarteifio, and the Guest of Honour for the occasion, Mr Peter Osei Duah, had jointly presented his award to him to climax the 33rd SWAG Awards Night at the Round Pavillion of the Trade Fair Centre in Accra last Saturday.

“I am looking forward to seeing Ghana as the peaceful and beautiful place it has always been after the Presidential run-off. I love my country and the people in it and it is this love that has always spurred me on to greater heights in world boxing,” the IBF bantamweight champion said.

Agbeko, who also took home the Professional Boxer of the Year award, was among 16 award winners who were honoured on Saturday.

Notable among them was the Footballer of the Year award which went to Chelsea's Michael Essien. Following an injury he is currently nursing in the UK, Essien's award was received on his behalf by ex-Black Stars player, Tony Baffoe.

The event attracted a large number of guests, including traditional rulers, members of the sporting fraternity and representatives of the sponsors.

The National Paralympic Team (Team of the Year) and Athlete of the Year, Ajara Mohammed, drew wild applause as they emerged on the stage to receive their awards.

France-based Musa Narry's Discovery of the Year Award was picked on his behalf by his brother, while Ransford Osei received the Most Promising Player of the Year award.