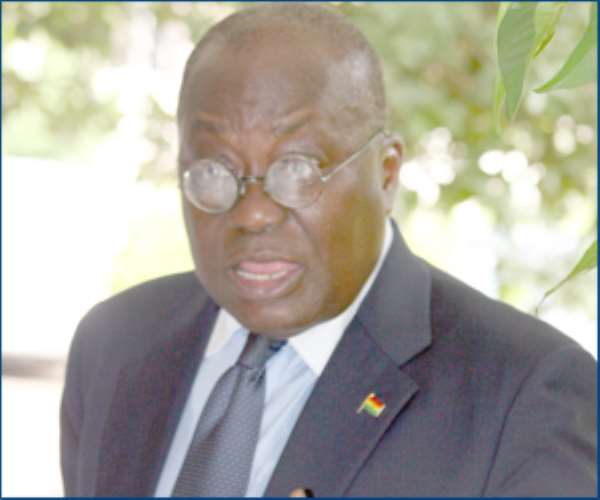 Nana Akufo Addo THE PRESIDENTIAL candidate of the New Patriotic Party (NPP), Nana Addo Dankwa Akufo-Addo has described as a fiasco the 'change' agenda being pursued by the opposition National Democratic Congress (NDC).

Parliament, he stated, was divided without any clear majority for the NDC, contrary to their claim of having majority seats in the House.

The NPP, according to him, was in the lead in the presidential election, indicating that it was a sign that the party was a force to reckon with.

“They have failed in their agenda for change,” he said.

The NDC's agenda for change, he stated, was a mischief and an attempt to drag the country into doldrums, cautioning Ghanaians not to be deceived into bringing them back to power in the run-off.

Citing the 2000 election results to support his statement, Akufo-Addo said when it was obvious Ghanaians wanted a change the then candidate Kufuor was in the lead after the first round but this was not the case this time around.

This, according to him, was a clear manifestation that he had literally won the elections as the country was not ripe for the purported change, urging the electorate to give the NPP another term to complete its business.

The flagbearer who was speaking to North Star Radio, a private radio station in Tamale, commended the people of the region for proving the rest of the world wrong by going through the electoral process peacefully and also thanked the over 300,000 voters in the region who voted for the party.

He however expressed worry that some significant seats were lost in the region and blamed the situation on the infighting that bedeviled the party, but underscored the need for the party's supporters to turn out in their numbers during the run-off.

The agenda of the party, he noted, was still alive and admitted there would be a difference in governance taking into the consideration the number of seats won.

He expressed joy that the PNC parliamentary caucus had thrown its weight behind him, indicating that his party would constitute the majority, and dispelled rumours that his administration could be made ungovernable.

The party's calculations, he disclosed, indicated that it had about 116 seats with about 8 seats being contested in the law courts, adding that hopefully the number would rise even before parliament begins sitting.

He reiterated his vision to introduce the Northern Development Fund (NDF) which is meant to create more jobs and other social interventions aimed at bridging the north-south gap.

The NDF, he explained, was also aimed at diffusing social tension as a result of poverty coupled with unemployment.

His commitment to reducing the 60 percent illiteracy rate would also be pursued by devoting about 10 percent of the country's GDP to that.

Enumerating the achievements of the NPP government, Nana Addo said it had already laid a solid foundation in education by spending over $1.4 billion annually in the educational sector since it assumed office, increasing the amount by over 200 percent.

Health care delivery, he stated, had been tremendously improved with the provision of adequate infrastructure and a curb in the country's brain drain.

On peace he promised to explore other methods in resolving conflicts to complement the measures adopted by traditional rulers to negotiate peace.

In conclusion he hinted that plans were underway to resolve the internal wrangling in the party which he said did not enable the NPP secure a first round victory.

He as well urged the citizenry to eschew tribal and ethnic politics, saying they nursed seeds of discord.