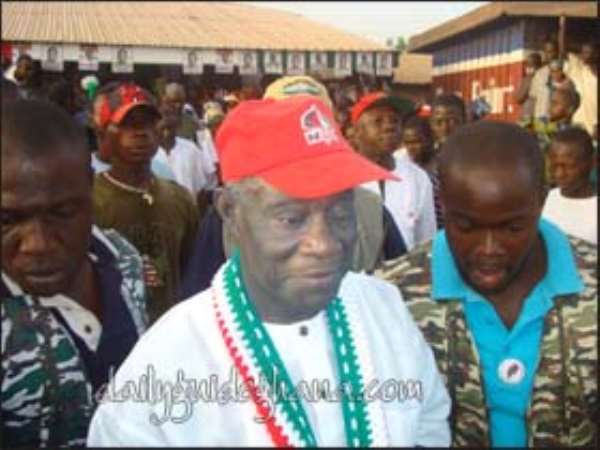 Pof. Mills The presidential candidate of the National Democratic Congress (NDC), Professor John Evans Atta Mills, on Tuesday addressed a large crowd of NDC supporters in Winneba as part of his four-day campaign tour of the Central region.

He is in the region to thank the people for voting for the party during the December 7 general elections and to also solicit their votes in the December 28 run-off.

Prof. Mills is being accompanied by Ama Benyiwa Doe, the party's National Women's Organiser, and other national and regional executives.

The presidential candidate had earlier addressed similar gatherings at Agona Nsaba, Agona Swedru, Awutu Bawjiase, Kasoa, and Gomoa Dawuranpong where he appealed to the people to vote massively for him on December 28 to become the President.

Addressing the gathering in Winneba, he told the people to vote for him so that the NDC majority caucus in parliament can accelerate developmental projects in their interest.

He advised the people not to sell their voters ID cards because if they did, they would not be able to take part in the elections.

Prof. Mills said when voted into power his government would build a strong economy to the benefit of Ghanaians.

He said “politicians must leave a legacy of truth so that they can always be remembered by the people they serve”.

The MP-elect for Effutu, Mike Allan Hammah, thanked the people for electing him to represent them in parliament.

He asked them to vote Prof. Atta Mills into power to ensure easy and quick development of the area.

Madam Ama Benyiwa Doe expressed optimism that Prof. Mills will win the run-off, since Ghanaians are calling for change in government. GNA