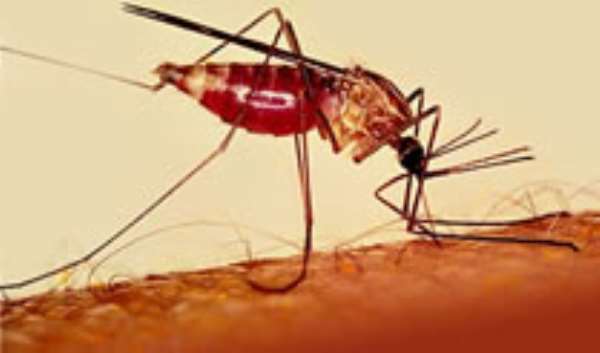 The World Bank is committing US$1.1

billion to expand country programmes to combat malaria under Phase

II of its Malaria Booster Programme, a release from the Accra Office

of the World Bank said on Wednesday.
Speaking at press conference in Abuja to launch the programme,

financial commitment would help African countries over the next

three years to expand their malaria prevention, care, and treatment

programmes and to sharply reduce the numbers of malaria-related

deaths and illness that afflicted their communities each year.

He said: “Malaria is a crushing development burden for poor

people and developing countries, which the World Bank is committed

to fighting for as long as it takes to get it under control.

“Malaria preys on the poor and keeps them poor. Poverty

prevents people from buying bed-nets to prevent malaria and

medicine to cure it. When people are struck by the disease, parents

families into debt from which they can't recover,” Zoellick said.

Programme would have a major impact in Africa's malaria-endemic

countries.
He was speaking at the press conference alongside the Minister of

Health from Nigeria; a World Bank Vice President and Country

Director and Leaders from the Roll Back Malaria Partnership and the

Global Fund.
Chambers said the “launch of Phase II of the World Bank's

Malaria Booster Programme is a major step toward ending deaths

from malaria, especially in high-burden countries in Africa. The

United Nations has called for universal coverage for the prevention

and treatment of malaria by 2010 and the World Bank's Booster

Program takes us a step closer to that goal”.
He said: “The Secretary General and I applaud the Bank's

expanded efforts and its determination to support African countries

as they combat this killer disease. Now it is up to the countries

themselves to prioritize malaria as a vital health and development

Region; said the Malaria Booster Programme would redouble its

effort and work to support health systems as they prevented and

treated malaria.
He said: “Through efforts of the World Bank and our partners

over the last few years, we are beginning to reduce malaria deaths in

some countries. Phase II of the Booster Program aims to save more

lives, improve health systems and help countries work together to

stop the spread of this disease.”
In response to requests from donors and other partners, the

World Bank has taken on a substantial role in supporting National

Malaria Control Programmes in coordinating efforts to fight malaria in

two of the highest-burden countries in Africa: the Democratic

Republic of Congo and Nigeria.
These countries account for 30 to 40 per cent of all malaria deaths

worldwide. Phase II of the Malaria Booster Programme would work

and improve health systems in the Democratic Republic of Congo

and Nigeria.
Awa Marie Coll-Seck, Executive Director of the Roll Back Malaria

Partnership, said: "When formidable partners like the World Bank,

the Global Fund, and the United Nations work together closely with

countries such as Nigeria and DR Congo, their collective efforts will

contribute enormously to the realization of the Global Malaria Action

Plan. Universal coverage with malaria control interventions is the first

step, then elimination and eventual eradication is our collective goal."

Rajat Gupta, Chairman of the Global Fund Board, agreed on the

importance of global partnerships in the fight against malaria and

said: “We are committed to working hand-in-hand with the Bank to

end malaria as a threat to public health and economic growth, and will

seek to implement a joint program of action to this end.”

He said: “Together our institutions can enable African countries

not only to achieve dramatic gains against this disease, but also to

strengthen the underlying health system to sustain the gains made.”

toward universal coverage in Nigeria, saying, “we are expanding our

scope of covering not only the vulnerable, but the total population at

detailed framework for an ongoing fight against malaria.

“In line with this development, we have updated the country's

strategic plan and developed a new business plan which will deliver

more commodities and ensure all populations at risk are covered

Jeffrey Sachs, Director of the Earth Institute at Columbia

Programme, saying: “Malaria control is one of the great economic

investments of our age. Malaria control saves lives by the million,

impoverished economies to attract new businesses and to flourish.”

He said the World Bank's Booster Programme was a vital

component of the global partnership to fight malaria in Africa, and