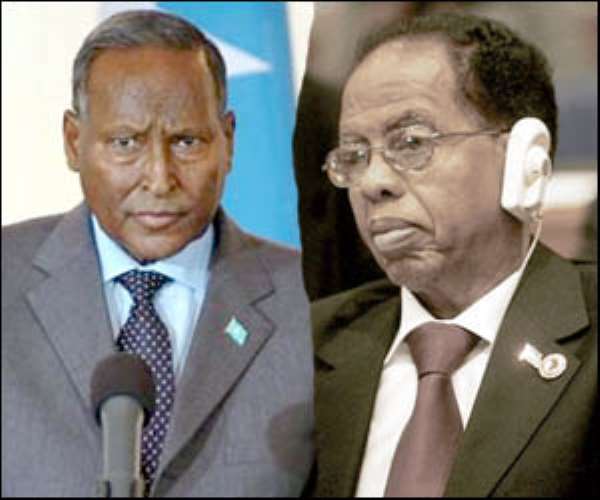 The Somali parliament on Monday backed Nur Hassan Hussein, who has been prime minister for about 13 months, in his power struggle with the president.

The move is likely to deepen the political impasse in a country already struggling with an Islamist revolt, a refugee crisis and rampant lawlessness that has fueled a wave of piracy off the Horn of Africa.

Somalia has been without an effective central government since 1991.

The United Nations-backed transitional government took office after Ethiopian troops ousted an Islamist government at the end of 2006, but controls little of the country outside the southwestern city of Baidoa.

Yusuf said Sunday he was firing Hussein for being ineffective. Hussein said the president did not have the power to fire him. The vast majority of members of parliament backed Hussein Monday in a vote of confidence.

But Tuesday Yusuf announced he had "decided to appoint the new premier to pull the country out of the current violence and non-functioning government."

He said Guled would form a Cabinet, which the president would appoint without asking parliament to confirm it.

Kenya warned it could impose sanctions against Yusuf on Tuesday, saying the power struggle between him and Hassan endangers peace efforts in Somalia.

Kenyan Foreign Minister Moses Wetangula singled out Yusuf in a sharply worded statement that called his current standoff with Hassan "totally destructive, unhelpful to the region and to Somali society in general."

Wetangula said Yusuf and his family could face targeted sanctions over his Sunday decision to sack Hassan.

"President Abdullahi Yusuf is a party to the summit deceleration and the Djibouti peace process and should not therefore take any unilateral decisions which hinder the attainment of peace in Somalia," Wetangula said.

"The current peace initiatives are at a critical stage and require support of all the peace loving Somalis and the region as a whole. The deviation from this path is certainly to bound to jeopardize the peace process." Kenya is a major player in international efforts to stabilize Somalia. CNN