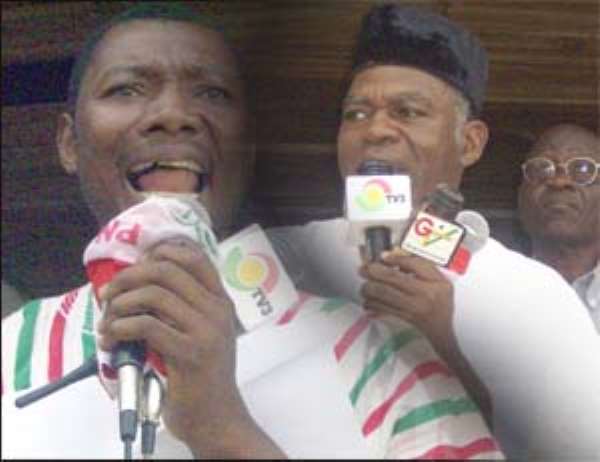 Dr Edward Maham and Bernard Mornah (PNC) The leadership of the People's National Convention (PNC) has joined the rank of smaller parties that have refused the main opposition National Democratic Congress's (NDC's) call for change and decided to stay neutral in the December 28 presidential run-off.

At a meeting yesterday at the party's headquarters at Kotobabi in Accra, the PNC had a split decision when the matter was put to vote, with each side recording 19 votes.

The PNC's decision not to support any of the two contending parties has dealt a big blow to the NDC which had hoped for all opposition alliance for the run-off against the ruling New Patriotic Party (NPP).

The Convention People's Party (CPP) had earlier declared the same position at a crunch Central Committee meeting on Saturday.

The PNC National Executive Committee held a marathon meeting to decide whether to support the NPP or the opposition NDC in the December 28 presidential run-off.

DAILY GUIDE learnt that those who opposed the PNC backing the opposition NDC and opted for the NPP argued on the basis that the party was very strong in the northern part of the country where its founding father and former president, Dr. Hilla Limann came from.

The group asserted that it was the Jerry Rawlings (P)NDC which toppled Dr. Limann's administration in 1981 and any attempt to support the NDC in this crucial moment would destroy party unity and rebuilding in its stronghold of the northern part of the country.

Those in support of the NDC on the hand, DAILY GUIDE learnt, stressed that both the PNC and the NDC called for change and that it is important to continue with the process in the presidential run-off.

Even before the crucial meeting, there were heated and sometimes confrontational arguments among the supporters as to which of the two parties to support: the NPP or the NDC.

Whilst majority of those from the Northern part of the country, Brong Ahafo and the Eastern regions were strongly in support of the ruling NPP, a number of them from Ashaiman and Nima in the Greater Accra region were solidly rooting for the NDC.

The general secretary of the party, Bernard Mornah told journalists after the meeting that after considering proposals from both the NPP and the NDC, there were heated disagreements by the national executive of the party on which of the two contesting parties to support in the second round.

According to him, the proposals of both the NPP and the NDC talked about giving ministerial, ambassadorial, DCE positions to the PNC in the event of any of them wining the presidential run-off, but that could not sway the members in one direction and hence the deadlock.

Mr. Mornah noted that for every individual to express their democratic right, the question of which party to support in the run-off was put to a vote and out of 40 members, there was a split-decision of 19-19 with two abstentions, compelling the NEC to come out with the neutral verdict.

A source close to the meeting told this paper that Dr. Edward Mahama, the PNC presidential candidate and one other person were the two members who did not cast their votes.

Bernard Mornah explained that the decision by members was good for the internal democracy, unity and the future of the party, adding that members had their own strong opinions and they exhibited them without fear or favour.

The national chairman of the party, Alhaji Ahmed Ramadan, in an interview, stated that the party has now given the green light for individual members in the constituencies to campaign and vote for the party of their choice whilst efforts are being put in place to grow the party for the next general elections.

Alhaji Ramadan, a member of the NDC-inspired CJA, was said to have rooted for the NPP option, even though his comrades say they are for NDC.