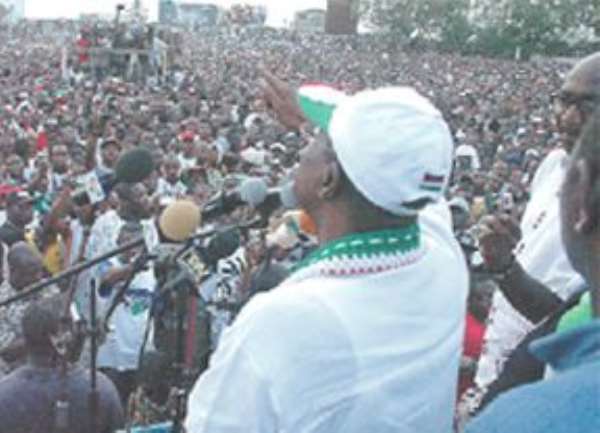 The presidential candidate of the National Democratic Congress (NDC) has predicted a massive victory for his party in the December 28 run-off.

Professor John Evans Atta Mills said the goodwill received from majority of Ghanaians after the first round was a clear indication that the people were desperate for a real change.

Addressing a mammoth rally at the Kawokudi Park in Accra, Prof Mills said, “The wind of change is blowing everywhere” and urged the people to make it real on December 28.

Prof Mills, who was flanked by some national executive members of the NDC, said after eight years in opposition, the party now had more seats in Parliament.

“They have now started sharing money and other items. The people of Ghana will take them but they will take their decision when they enter the polling booths. I can tell you that they will give them a bigger blow,” he said.

He urged members and supporters of the NDC to be wide awake and never be complacent about the successes of the December 7 elections, adding that to attain majority votes to form the next government they must go out in their numbers to vote and stay vigilant.

He said the results of the elections had made the once arrogant NPP government that treated Ghanaians with contempt and scorn to humbly beg the people for their votes.

Prof. Mills said an NDC government would hit the ground running and find solutions to the problems facing the majority of Ghanaians, saying it would not have the time to be vindictive and witch-hunt.

He added that an NDC government under him would pursue an agenda that would heal the polarised nation and ensure that Ghanaians united to put their shoulders to the wheel for development.

He said it was worrying that while he was seeking to unite the country, some people from other political parties had started intimidating and insulting other ethnic groups for voting for the NDC and urged opinion leaders in the country to intervene.

Prof. Mills said it was worrying that when the NDC was calling on the government to redu ce fuel prices, the government argued that it needed to maintain the prices to defray the Tema Oil Refinery (TOR) debt.

He said after realising that Ghanaians were wide awake and wanted a change, it had reduced the fuel prices, adding that “an Atta Mills government will even reduce it further”.

He described as lies the rumours that his administration would abolish the National Health Insurance Scheme (NHIS), the School Feeding Programme and the National Youth Employment Programme.

Prof. Mills commended the security agencies for their show of professionalism and love for the country before, during and after the elections.

He also thanked the teeming supporters of the party, teachers, drivers and NDC polling agents for their support.

The National Youth Organiser of the party, Mr Haruna Iddrisu, urged the youth of the country who were desirous of change for a better Ghana to vote massively for Prof Mills.

He said the party was not in favour of the painting of the little finger with indelible ink and called on the EC to change it. Story by Donald Ato Dapatem