I'm Ready For Round Two — Mills 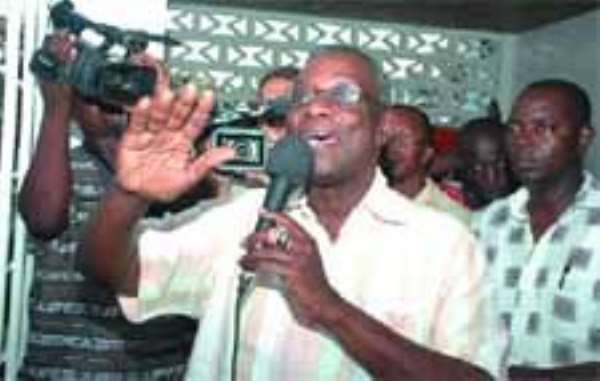 The presidential candidate of the National Democratic Congress (NDC), Professor John Evans Atta Mills, has expressed his gratitude to Ghanaians “for voting for change” and says he is ready for the second round contest with the New Patriotic Party's Nana Addo Danquah Akufo-Addo.

“I accept the results as announced by the Electoral Commission (EC) and I am ready for the contest for the presidency again,” he told the media at the campaign office of the party at Kuku Hill, Osu, Accra, moments after the EC had announced the results.

Members of the campaign team and some supporters of the party gathered at the campaign office to listen to the announcement of the results, which was broadcast live on radio and television.

The room was calm without any tension as the results were being announced, since most of them were holding documents of the results, which tallied with the figures that were given by the Chairman of the Electoral Commission, Dr Kwadwo Afari-Gyan.

Prof. Mills listened to the announcement of the results in his office with some high ranking members of the party and although the media was not with him, insiders said he was very composed as the results were being announced.

When he emerged out of his office to address the media about 20 minutes after the results had been announced, he was greeted with applause by the enthusiastic supporters who had gathered at the main yard of the campaign office.

Wearing a white shirt over black trousers, Prof. Mills told the press that the voting pattern of the December elections had sent a clear message about the change that Ghanaians were yearning for.

“Ghanaians have already spoken and I want them to speak louder, come December 28, 2008 to confirm their message to the whole world,” he said, and called for a massive turnout during the round-off.

He said since Ghanaians wanted a change, “I promise to offer them a change for a better Ghana to create equal opportunities for all Ghanaians.”

Prof. Mills stated that since the NDC had won in seven out of the 10 regions of the country and had a majority in Parliament, there was the need for Ghanaians to add the presidency to the NDC “for the change to be complete”.

Prof. Mills said he would submit proposals to Parliament within 100 days if he was elected as president to drastically reduce prices of petroleum products to alleviate the plight of Ghanaians.

He also repeated his promise to teachers, civil servants, staff of the security agencies to offer them better conditions of service to motivate them to give their best.

Prof. Mills thanked the staff of the EC, the media and foreign and local observers for their roles in making the December 7 elections successful, and said Ghanaians owed them a debt of gratitude.

Prof. Mills also appealed to the smaller opposition parties that also campaigned for change to team up with the NDC in order to bring about the change they all campaigned for.

Some of the party's parliamentary candidates who won their seats also trooped to the campaign office to listen to the announcement of the results.

The Member of Parliament-elect for Ledzokuku, Nii Nortey Duah, told the Daily Graphic that the run-off alone was a victory for the NDC and a protest vote against the ruling New Patriotic Party (NPP).

He predicted a massive win for the NDC during the round-off, since, according to him, it had now become clear that Ghanaians wanted change.

Nii Duah said he would establish what he called “The Ledzokuku Parliament” where he would meet a cross-section of the people from time to time to listen to their concerns and carry them to Parliament.