Even The Rains Couldn't Stop NPP 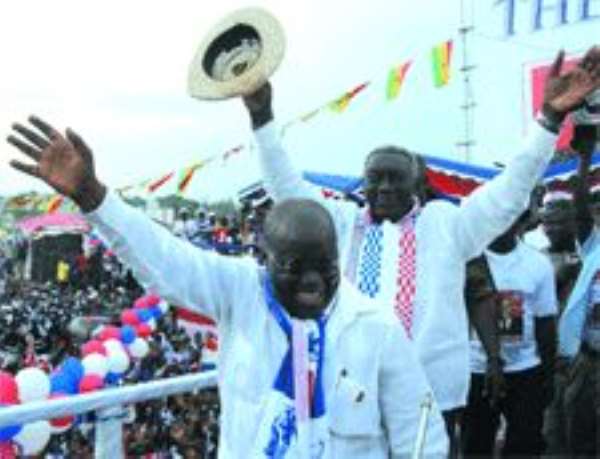 Thousands of New Patriotic Party (NPP) supporters across the country yesterday defied a 75-minute downpour to converge on the Accra Academy School Park to wrap up the party's campaign for tomorrow's elections.

Enthusiastic youth and the aged were engrossed in a sustained euphoria that started as early as 6.00 a.m. and went on way beyond dusk as they sang, danced, whistled and made any gesture to arouse their excitement.

A fleet of buses and trucks carrying large numbers of NPP supporters, amid brass band music and singing, streamed from all directions towards the venue of the rally, causing long vehicular traffic on the Kaneshie-Mallam Road in the process.

Indeed, about 300 metres away from the main entrance to the school, the movement of vehicles and humans was very slow, as every inch of space was virtually covered.

As the euphoria peaked around 2.00 p.m., down came the rains, which dispersed some of the crowd, but many others defied them and from all corners they trooped to the rally grounds in large numbers.

Some of them told the Daily Graphic that the elephant, the symbol of the NPP, did not fear rain, pointing out that "whether rain or shine, we are moving forward".

Others described the rains as a good omen for the party in tomorrow's elections, adding that but for the rains the crowd could not have been contained.

Nevertheless, after the rains had subsided around 3:20 p.m., more enthusiastic supporters trooped to the rally grounds, while many of those who had left during the downpour returned  to the park.

Clad in party T-shirts and other paraphernalia, the large crowd spilled over the premises of Accra Academy to surrounding areas like the Kaneshie Market, Bubuashie, Darkuman, Mateheko and the main Kaneshie-Mallam Road.

The rally generated long vehicular traffic on the Kaneshie-Mallam Road and other roads around the area, particularly those leading in and out of the Kaneshie Market.

Traders and commercial operators took advantage of the situation to do brisk business with the sale of party paraphernalia and food.

The excitement at the rally grounds underlined the conviction of NPP activists of a decisive victory in the elections.

Already, many local and international opinion polls suggest that the NPP flag bearer is on course for a first-round victory.

He led the people to thank God for making the rally possible and President Kufuor for his dedicated service to the nation.

Nana Akufo-Addo said tomorrow's elections were a moment of decision by Ghanaians as to whether the nation was moving forward or backward.

He said the National Democratic Congress (NDC) failed Ghanaians and so "we are not going to put the destiny of the nation into the hands of these incompetent, unproductive and inefficient people".

Nana Akufo-Addo said President Kufuor had laid a solid foundation for the development of the nation and it was time for him (Akufo-Addo) to continue the good work.

He said the next phase of the country's development would be an industrial revolution to create more jobs and wealth for the people.

Nana Akufo-Addo said he was not into politics to enrich himself but "to help develop our nation as a free democratic country where human rights and the rule of law exist".

He said the NPP had delivered on its promise of positive change made in 2000, adding that there was no worthy change the NDC could offer the nation as it professed.

President Kufuor said it was the wish of every leader to have a worthy successor who would take over from him, maintaining that thankfully God had given Nana Akufo-Addo to take over the mantle.

He dismissed accusations of corruption against the NPP administration, saying, "This government is a caring government".

President Kufuor, whose speech was frequently interrupted by the crowd with shouts of "Dada oo dende!" "Dada oo dende!!", urged the people to vote for Nana Akufo-Addo, whom he introduced to the crowd as his successor.