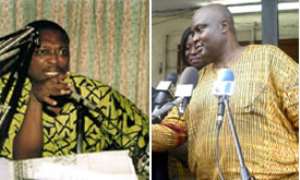 
Senior media practitioners are expecting Sunday's presidential and parliamentary elections across Ghana to be the most credible, peaceful and cleanest in the nation's history.

Pollster, Ben Ephson, Media Commission's Executive Secretary, George Sarpong, Kwaku Baaku Junior of the Crusading Guide and Eric Kwame Ametor of the Ghana Palaver have all touted the coming election as one to add grace to Ghana's credibility as a democratic country.

They shared these sentiments on News File, Joy FM's news analysis programmes on Saturday, just a day before the crucial election.

According to Ben Ephson, the factors that triggered the carnage in Kenya and Zimbabwe were experienced in 1992 election in Ghana but were peacefully managed without the shedding of blood.

He cited the use of an opaque ballot box which was stuffed, the separation of the presidential election from that of the parliamentary which gave some advantage for the NDC as some of the shortfalls.

“To the NPP's credit they could have decided to cause mayhem but rather chose to write the stolen credit,” he noted.

Even though he concedes there may still be some problems inherent in the electoral system, they are not significant enough to plunge the country into chaos he added.

Parties, he said have become increasingly aware that elections are either won or lost at the polling stations and have trained polling agents to police the ballots on Sunday.

George Sarpong said there is no defining issue that could cause conflict in the polls, adding unless parties have mobilized to cause mayhem, the polls will generally be peaceful.

He lauded the transparent nature of the country's electoral system, which he said was born out protest and criticisms

He said the many complaints and criticisms against the Electoral Commission, have only served to deepen the transparent nature of the polls.

Kweku Baako and Ametor Kwame all credited the stakeholders for creating an enabling environment for what is expected to be a peaceful election.

He also cited the training of all party agents at the expense of the state as one of the many improvements which has been chalked by the country.

Sunday's election he reckoned will be peaceful and credible than that of the 1979 election which brought the Limann government in power.

Ameto Kwame noted an Electoral Commission which has been consultants to other African countries on electoral issues should have avoided some of the minor flaws it suffered.

He however was optimistic the election will be peaceful.

Their comments were given an extra boost by a text message from a listener; whose South African friend had vowed to resettle in Ghana because of the peaceful manner the parties had conducted the campaigns so far.

“I can't believe you are voting on Sunday, the country is calm, business is moving on smoothly, the message said.

The writers friend, according to the text message, had visited Nigeria, Zimbabwe, Kenya prior to their elections but the scenario had been different.Story by Nathan Gadugah