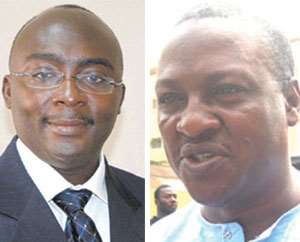 Spellbinding excitement underlined last Friday's vice presidential debate in Cape Coast, when Hon John Mahama and Mahamudu Bawumia engaged each other in a thrilling encounter, with the latter opening a cut over the eye of the former with sustained jabs on the Ghana Education Trust Fund (GETFund), which John insisted had been frittered away by the New Patriotic Party (NPP) government, without acknowledging the National Democratic Congress (NDC) as the originator of the scheme, and abusing the scheme which was supposed to be supplementary to the main educational budget.

For the fist time in the thrilling encounter, that got the goat of the banker, he jarred John with a series of well-timed blows to his head, snapping it back each time

The follow-up punch came in the form of a rebuttal, which clearly unsettled the veteran legislator, who was exploiting his communication skills to great advantage.

Hon. Mahama made the point that the GETFund was born out of the 2.5 % additional levy that was imposed on the public as a purely consumption tax - the brainchild of the NDC (Ekwow Spio Garbrah).

The NPP was leaning heavily on it for their infrastructural development of educational institutions throughout the country, which he felt, was inexcusable, because they failed to give credit to the NDC, which birthed the scheme.

He even went as far as to give the legislative history of the GETFund.

Bristling with controlled anger, Bawumia retorted sharply that nothing could be further from the truth.

They left nothing in the bank from the GETFund, something that Osafo Maafo, Finance Minister at the time, had been saying at the every opportunity.

Mahamudu laid it down in no uncertain terms, that the NPP government had grown the economy to such an extent, that the economy was robust enough to absorb the kind of spending that the development of the various educational institutions entailed.

Rattling off figures, Dr. Bawumia, who had taught banking and finance and had obtained a first class in Economics, said that the Ghanaian economy had grown beyond the $674.00 GDP, that is the current rate, from the $354 a few years ago, and that with the current growth trajectory of the nation under the NPP administration, Ghana would reach the $1,000 dollars expected of her by 2020, to a shorter time of 2012.

The key to all this lay in education, and teachers who were at the centre of the development, were being taken care of by a two fold increase in remuneration by 10 % of GDP, from the 5% previously.

And to agree with Cop's Dr. Samara, an international development consultant, he said that it was not only teachers who had felt an increase in their earnings, but the average teacher could now buy 23 bags of cement with his wages every month.

Even though clapping was forbidden, you could see people in the audience clapping with their eyelids.

“Nurses are the second highest paid in Africa,” he added for effect.

By the time CPP's Abu Sakara could take off on a similar tangent, an exasperated John Mahama wearily managed to engage the two with wry comments - trust the technocrats to engage in this sort of talk…

The handlers went through various motions – Kwamena Ahwoi with his trademark bandana hat was on hand, but it was Ms. Hannah Tetteh, the prim and proper Director of Communications with an appropriate evening overflowing gown that hid her ample flesh she was endowed with, to simply tag along.

She had been pencilled in as a running-mate earlier at some time in the jockeying for running-mates.

As soon as the bell tolled for the cessation of hostilities, Mahamudu was swarmed by a trio of handlers, Messrs Gabby Okyere Darko, Yoofi Grant and Kweku Boateng, the Chairman of MCA, with the loyal mayarafi-clad Samira, his wife, who preferred a ring side seat to urge him on through his initial nervous moments, before he exploded with confidence towards the home stretch.

He even gestured to the moderators to be allowed to rebut once more, but was mercifully disallowed, and the bleeding John was mercifully spared from further drubbing.

But, the most riveting gaze in the audience was by far 'my beautiful wife Lily', the companion of Dr. Abu Sakara (dob 1957), whose intensely piercing gaze on her quarry left him with no room for meandering and wool-gathering.

For the CPP Abu Sakara, there was no doubt that he was the revelation of the evening, but if sceptics and the undecided still remained in the audience and the public at large, there was no question that he would be a candidate for their votes.

The loud laughter that followed, each time the PNC's 50 year old evangelist cycling mom, Petra Amegashie intervened, it was construed by most as bringing the much needed comic relief, than anything substantial.

True, she made a meal of the issues, giving Dr. Edward Mahama, her presidential candidate, precious nothing, and she was largely humoured by the audience for her foibles – “these were Dr. Mahama's ideas, which these two are fighting to claim credit for, please vote for Edward Mahama, the man for the moment.”

There was no question that the evening's event, put together by the Institute of Economic Affairs (IEA), belonged to Dr. Abu Sakara, who let it be known that like Dr. Mills, he too obtained his PhD at age 27, and Dr. Mahamdu Bawumia also.

It was difficult to see what John brought to the table, except for his star appearance and his good naturedness. But those were qualities that Bawumia possessed as well, but his youthfulness (dob1965) and his awesome grasp of economic issues, gave hope to the public that this was a 'boy' who could travel the distance if given the chance, and offered hope to millions in the NPP, who were looking for hope. In Mahamudu, they found it.

Over in Sefwi Wiawso, where the NPP presidential candidate delayed his trip to the Ashanti Region to watch the debate at the Sefwi Wiawso Minado Hotel, there was spontaneous applause when the bell tolled for the end of the debate. Among the settlers in the Sefwi areas, where the NDC dominance is under constant pressure by the NPP, there was virtual disappointment among the supporters of the NDC.