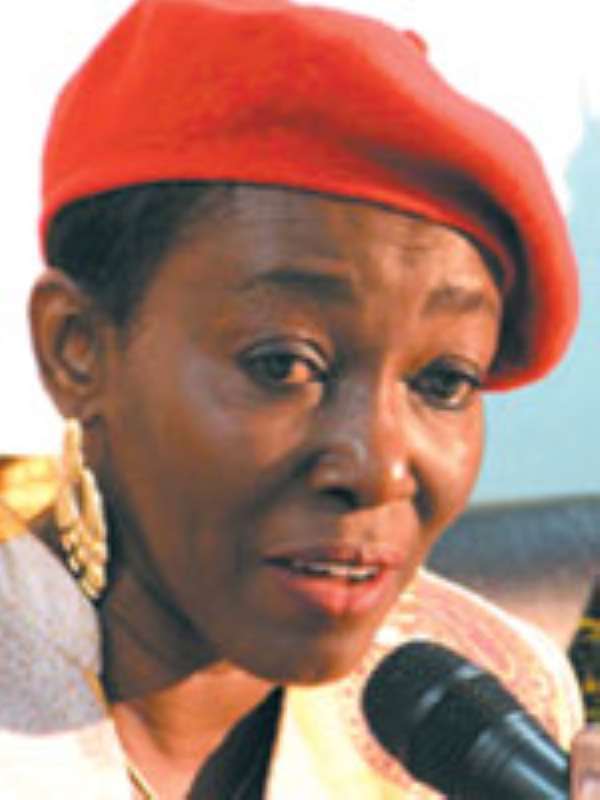 The Former First Lady, Nana Konadu Agyemang Rawlings, has appealed to Ghanaians to vote the New Patriotic Party (NPP) out of government in the forthcoming general elections, as she claimed that the government had caused more harm to the people, through what she called insensitive policies and programmes, which had brought untold hardships on the people.

According to the Former First Lady, the alleged abuse of power, coupled with corrupt practices, harsh economic policies, intimidations and injustices, were some of the reasons why Ghanaians should vote the government out of power, and opt for the National Democratic Congress (NDC), which would be led by Prof. John Evans Atta Mills.

Nana Konadu Agyemang Rawlings, who was accompanied by party gurus, which included Ms. Shirley Ayitey, Dr. Ekwow Spio Garbrah and other party officials, were in the Volta Region to canvas for votes for the NDC, and held various rallies and durbars in the Ho Central, Ho West and South-Dayi constituencies, where her audience included market women.

In a separate address, Dr. Spio Garbrah expressed worry over the attitude of the media, which he observed, undermined the profession, especially the trend at which media personnel had compromised their role in society, and become the voice of the government, instead of the people.

The Former First Lady observed that her tour across the country revealed that almost every Ghanaian was calling for change, and that it was because the NPP had not been able to fulfill its promises of improving on the living standard of the people, but rather creating opportunities for a few to enrich themselves at the expense of the ordinary tax payer, adding that Ashanti, Central and Brong Ahafo regions had all fallen for the NDC.

“We cannot live in a country where a small minority, led by the President, can impoverish the rest of Ghanaians. You know what they want to do? They want to make you so poor that you don't have the energy to complain.”

Nana Konadu lamented over the current economic situation, which she noted, Prof. Mills, with an NDC-led government, would change, and ensure that Ghanaians were provided with jobs to enable them work, so as to help transform their lives. “What they have done to us, is to make sure that everyday of your life, you are thinking of how to survive.”

At this point, the Former First Lady sounded like a priest when she indicated that in life one ought to ask whether one was able to fulfill the work of God, “because we came to this world with nothing, and will go with nothing,” “and quickly suggested that the NPP, when given the chance, the third time, would continue to make the people poor.”

Addressing the rally, Dr. Ekwow Spio Garbrah alleged that the NPP was noted for saying things they could not do, as they did things differently, and charged that the democratic pillars had collapsed under President Kufuor's administration. He noted that the executive and judiciary were abusing the proper structures in those arms of government.

Dr. Garbrah, who assured the people of victory at this year's polls, indicated that the various sectors of the economy were in bad shape, and that if the NPP was retained, it would not solve the problems confronting the country, since it was the same government that created the existing problems.

“I hope by now, we can differentiate between those who don't make big promises, but even the small ones they promise, they can't deliver, that is the NPP.”

The NDC parliamentary candidate for South-Dayi, Mr. Edem Asimah, expressed optimism that Prof. Mills would win the December election, and urged the people to vote for the NDC.