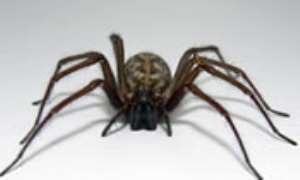 A surreal email exchange of an Australian's bid to pay an overdue bill with his drawing of a spider has become an internet hit.

David Thorne's alleged conversation with an account clerk in which she refused to accept the childish painting as payment but agreed to email it back to him has been forwarded around the world.

His first response to a request for payment read: "I do not have any money so am sending you this drawing I did of a spider instead. I value the drawing at $233.95 so trust that this settles the matter."

The employee, named as Jane Gilles, rejected the drawing but agreed to return it in an email attachment, reports News.com.au

But Mr Thorne was not satisfied: "Are you sure this drawing of a spider is the one I sent you? This spider only has seven legs and I do not feel I would have made such an elementary mistake when I drew it."

After conceding he may have sent a seven-legged spider, he added an extra leg to the picture and again offered it as payment. "I trust this will bring the matter to a conclusion."

Mr Thorne posted the conversation on his website 27bslash6.com and it has since spread around the internet.

The spider, a crude black and white graphic with a smiley face, has become so popular that it has been auctioned on eBay.

The Adelaide design director insists that all the exchanges on his site actually took place.

"The dialogue in the email transcripts are verbatim. Again, they would not be amusing to me otherwise," he said. "I did amend a spelling mistake after posting the spider page but that has been the only change."