Makeba Sings Her Way into Her Ancestral Abode 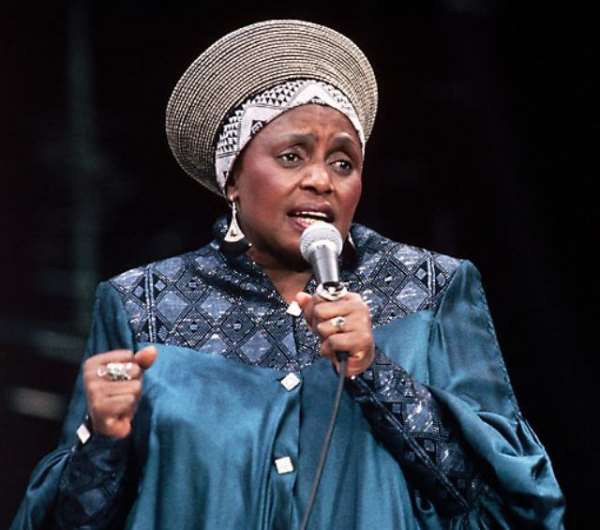 Just when I thought I was recovering, somewhat (for one never really or fully recovers from such inevitably traumatic events), from the recent passing of Eskia (Ezekiel) Mphahlele, the South African literary giant, now comes the earth-quaking passing of “Mama Africa.” The title of “Mama Africa” is widely known to be the copyrighted property of two African women giants, both of South African nationality. Of course, the allusions are, respectively, to Miriam Makeba (1932-2008) and Winnie Madikizela-Mandela (b. 1936). It is a title that is hard-earned; in the case of the Queen of African Music (a.k.a. Miriam Makeba), it was duly conferred after years of using the resplendent cachet of the unique rhythms of her soul to spotlight the odious culture of Apartheid and European racism in Africa. Such evergreen classics as “African Convention,” “Pata Pata” (which was actually composed by Makeba's predeceased Zimbabwean-born musical partner), “The Click Song” and “Malaika” trill through my tympanic membrane even as I write this tribute. I can also hear her silken voice croon something that sounds like “Gewudini,” whatever that means.

On the other hand, the former Mrs. Winnie Madikizela-Mandela earned her enviable title of “Mama Africa” through her courageous resistance, endurance and survival of the brass-knuckled and jack-booted savagery that was the main dietary course of Afrikaner political culture vis-à-vis indigenous South Africans. I guess most of us aficionados of both native South African music and political fortunes (or misfortunes, for that matter) can confidently, alongside of Winnie Mandela, genuinely claim that, indeed, with her abrupt and early-morning passing on the Italian peninsular village of Castel Volturno, A Part of Our Souls has transitioned with Ms. Makeba.

In the preceding sense, therefore, it is a patent non-issue to even attempt an artificial revision of twentieth-century African political history by presuming to cavalierly describe Winnie Madikizela-Mandela as “the former Mrs. Mandela.” For no such phenomenon exists when it comes to the epic narrative of the woman who almost single-handedly and single-mindedly held the fort, as it were, for both the African National Congress' government-in-exile as well as the brave warriors and heroes perennially and extortionately incarcerated on Robben Island and the other equally hideous neo-Nazi concentration camps. One cannot rationally describe her as “the former Mrs. Mandela” because she, alone, almost more than any of the legion women in her former husband's life, epitomized the quintessence of the anti-Apartheid struggle which has virtually come to be ineluctably envisaged as being synonymous with the Mandela cognomen.

My own personal experience with Ms. Makeba has been rather subliminal, albeit no less passionate or intimate – for it has been through both a studious appreciation of her music as well as her laudable civil and human rights activities all over the world. Like a conscientious victim of the Jewish Holocaust, Ms. Makeba was unflappably determined that other similarly situated, or vulnerable, persons not endure her untold and unpardonable taste of brutal and perennial humiliation and dehumanizing and slavo-colonial policies of Apartheid South Africa. Ironically, though, it was precisely the foregoing that both elevated her stature to the level of the mythical as well as humanized her personality beyond measure or tractability.

At 76, our musical “Mama Africa” was, Christocentrically speaking, relishing that glorious period of grace afforded those who have led productive and beneficent existence. In the case of our indefatigable subject, Miriam Makeba died doing exactly what she had immutably been programmed by her great revulsion against Apartheid to do – she died valiantly defending the human right of the Italian journalist and writer Roberto Soviano to inveigh against deliberately organized societal instability, as a business enterprise, with her music.

Still, the striking historical dimension of her passing in Italy appears all the more oracular by this very transitional process. For it was almost exactly one-half century since Ms. Makeba registered her celebrity breakthrough at the Venice Film Festival, in 1959. She had then creditably acquitted herself in the anti-Apartheid film titled “Come Back, Africa.” And so in a real historical and, perhaps, even vatical, sense, dying in the very nation whose august filmic fiesta mid-wifed her primal esthetic flair amounted to a definitive closure of sorts. It also came exactly 23 years after the untimely passing of Mama Africa's one and only daughter and child, Bongi Makeba in Ahmed Sekou Toure's Guinea.

In either 1988 or 1989, I forget exactly which, I had the rare opportunity and privilege of meeting and interviewing Mr. Stokely Carmichael (a.k.a. Kwame Toure), a former husband of Ms. Makeba, for the City College of New York's close-circuit television station and video center. What I most vividly remember from the aforementioned interview is Kwame Toure's avuncular impatience with the fact that I appeared to him to know and appreciate too little about his heroes and patrons, postcolonial Africa's kindred and pioneering revolutionary dictators, namely, Ghana's President Kwame Nkrumah, whose first name he had adopted, and President Ahmed Sekou Toure, of Guinea, whose last name Mr. Carmichael had not only adopted as his own surname, but also one by which the former leader of the Black Panthers visibly appeared to live and swear by. What is most remarkable about my interview with Mr. Stokely Carmichael, though, remains the fact that I promptly fell out of favor with almost every white professor on the City College campus who had previously warmed up to me. To be certain, I would even be “white-listed” and would have to, literally, get out of town in order to be able to successfully pursue my graduate education.

In sum, as the maxim goes: The recently transitioned have great company on the other side. They are still and at peace with themselves and their souls. The mantle of emulation, however, is for us, the living, to keep!