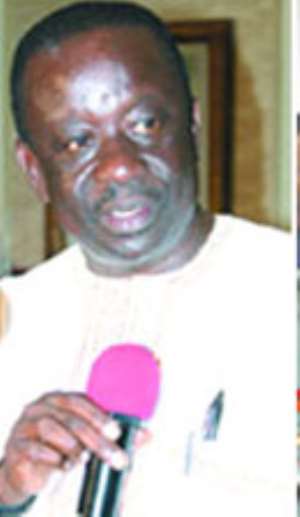 The Minister for Defence, Mr. Albert Kan Dapaah, has described the fateful motor accident, which occurred at Twimeankwanta in the Techiman Municipality last Saturday, where the lives of twenty-two persons were lost, as a shock to the entire nation, and has ordered thorough investigations into alleged military gunshots, said to be the cause. It is alleged that a KIA truck, with registration AS 1627 V, loaded with illegal sawn lumber, ran into a 207 Benz bus with registration BA 656 X, resulting in the fatal accident.

The KIA truck was being reportedly chased by a Forestry task force approaching from Sunyani to Techiman, whilst the 207 Benz bus was from Techiman to Sunyani.

The forestry taskforce reportedly fired at the tyre of the KIA truck, which made the driver lose control and veer into the path of the Benz bus, causing the accident which accounted for the death of 20 persons in the bus, while the driver of the KIA and his mate also died on the spot.

Fortunately, two of the victims in the Benz bus, Grace Pokuaa, 50 years, and Mary Damoah, 40, were alive, but unfortunately in the morning of Monday November 10, 2008, Grace Pokuaa, who was at the theatre for surgical operation at the Techiman Holy Family Hospital, died to bring the number of dead to 23.

The love for money at the expense of human life, was clearly demonstrated, when the lumber in the KIA was being reloaded into another KIA truck, without any attention or support being given to the accident victims, and when queried why they were interested in the logs more than the victims, it was reportedly answered that it was money that would be used to organise the funeral of the dead.

However, the Minister of Defence said the government had the responsibility of finding out exactly what caused the accident, since there had been a controversy on what really was the cause.

Mr. Kan Dapaah said he had instructed the Army Commander, Major General Samuel Odotei, to set up a committee to investigate the matter, since there were two soldiers among the task force.

He noted that Ghanaians must obey orders from the law enforcement agents under all circumstances, to prevent such occurrences.

The bereaved families were highly agitated when they were asked by the hospital authorities to pay an amount of GH¢37.50 per body, for the cost of autopsy, before the release of the dead bodies.

They complained that since the mortuary was full, the bodies of the accident victims were placed on the bare floor without proper preservation, but the authorities at the hospital were resorting to bureaucratic processes before releasing the bodies to the various family members.

The Techiman Municipal Chief Executive offered to pay all the fees on behalf of the bereaved families, and urged the hospital authorities do the necessary processing and documentation to release the bodies, for calm to be restored.

A Medical Officer at the hospital, Dr. Ben Osafo Boateng, said his outfit would ensure that the bodies were released to the families as required, but insisted that that of the driver of the KIA truck and his mate would both undergo detailed autopsy, since there was an allegation of gunshots.

The Minister for Defence, expressed worry that not a single person had lodged an official complaint to the police on the alleged gunshots, appealing to the media to cease speculating, and allow both the police and the army to conduct their independent investigations into the matter.

Mr. Kan Dapaah visited the Paramount Chief of Nkoranza, Okatakyie Agyeman Kudom, where most of the victims hail from, to extend the condolences of the President and the state for the departed souls.

He also visited the Palace of the Paramount Chief of Techiman, Oseadeeyo Akumfi Ameyaw.