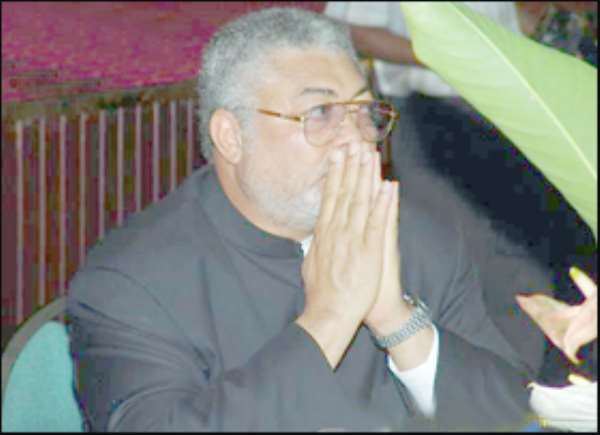 A man has been killed at the entrance of one of former President Jerry John Rawlings' many properties scattered around the country. The sighting of the lifeless body of a male adult at the Vume plush property put the former President in an unusual quagmire when he was called and informed about it.

The unusual spectacle had become a topic of discussion among residents of the sleepy settlement of Vume along the Volta River, near Sogakope.

The find was made in the early hours of last Thursday and Mr. Rawlings who was not available at the time, quickly informed by scared caretakers.

Details of the dead man were not immediately available at the time of going to press but the South Tongu District Police Command, under whose jurisdiction Vume is located, was duly alerted, according to information reaching DAILY GUIDE.

Former President Rawlings has a passion for speed boats and riverfront accommodation where he occasionally visits when he wants to be away from the hustle and bustle of city life.

While some of his properties are situated in Accra, others are elsewhere in the countryside under the care of hired staff.

During a routine performance of their chores on Thursday morning, the caretakers of the Vume property of Mr. Rawlings which includes a speedboat yard, found a strange spectacle of a dead man.

The lifeless body of the male adult was trapped at the entrance of this plush speedboat yard, a spectacle which scared the caretakers.

DAILY GUIDE learnt that soon after the discovery, the caretakers called their boss, Mr. Rawlings, informing him about the find.

Upon hearing about incident, Rawlings who was on a campaign tour of the Ashanti region, was said to have asked Dr. Ben Glover, owner of Cisnero Hotel at Sogakope to make an official report to the Police.

At the time of filing this report, DAILY GUIDE was unable to ascertain what steps the Police had taken on the matter especially if a formal complaint had indeed been lodged.

Under such circumstances, crime scene operatives of the Criminal Investigations Department of the Police would move in to gather possible evidence on the ground if any, after which the body would be moved to the morgue for a detailed post mortem examination.

Should the said Dr. Glover make the report to the Police, he would be required to give a statement about the incident.

Tongues are wagging in the sleepy settlement as to what could have led to the man being trapped at the entrance since it was not likely that the man committed suicide.

Some of the residents wanted to know whether the owner of the property would be required to assist the Police in their investigations.

Since the death occurred within Mr. Rawlings' property, it is set to dominate the attention of many Ghanaians in the days to come.

As for the local Police, these are stressful moments as they set about to investigate this mind-boggling occurrence in an unusual location.

When Charwey, a driver, crossed the path of Mr. Rawlings long before the former President exited power on the Tema Motorway causing an accident in which a life was lost, the media was awash with the story.

Even before Ghanaians could say Jack, Charway was found dead while being held by the Police.

While some suspected foul play, others maintained that the man died naturally. As for members of his family, they never forgave the former President, blaming him for ordering the death of the driver.