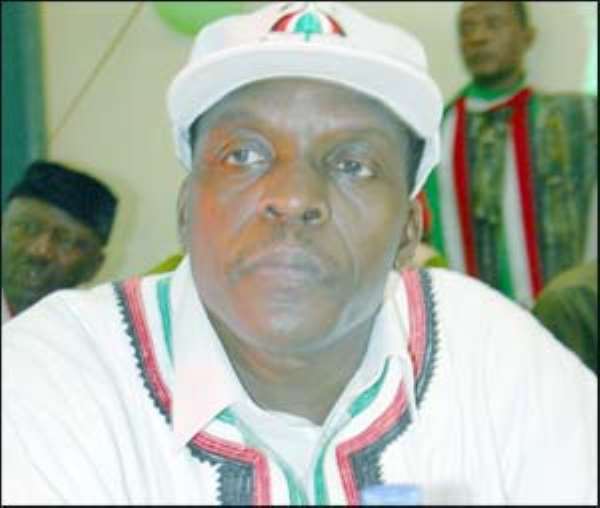 WE ARE tempted to repeat a question someone posed when he heard Minority Leader Alban Bagbin throwing mud at President John Agyekum Kufuor and officials of the ruling New Patriotic Party (NPP) over drug trafficking in the country- “Is the man serious at all?”

The answer is certainly “no” since he has no verifiable evidence at hand and might have been afflicted with the verbal malaise of the likes of Victor Smith and Mr. Jerry John Rawlings.

The position of Minority Leader in Parliament is such a deified position that the last thing we would expect anybody holding it to do is what the Nadowli MP did- throwing mud carelessly at respectable persons in society.

A Minority Leader of a political party which although unlikely to form the next government but could possibly do so in future must mind his words especially when communicating with a large audience.

The youth consider holders of such enviable positions as role models and so we shudder to think about what aspects of the lives of such persons the young boys and girls would pick when they listen to them.

We find it painful to also think that a Minority Leader can claim that 90 percent of cocaine suspects granted bail since 2001 have absconded. Such a lie has only one objective- to drag the name of our judicial system in the mud and this is a sad development.

The engagement in unnecessary hurling of invectives in a manner intended to tarnish the reputations of fellow Ghanaians has become a sad part of the largest minority grouping in the country today.

When former President Rawlings and his cashiered Special Aide Victor Smith are found in the depths of gutters insulting and dropping all manner of accusations people no longer squirm in their seats.

The foregone is their stock-in-trade but when personalities like Hon. Alban Bagbin whose names are even preceded with the enviable title “Hon” are associated with filthy utterances then we begin to wonder whether the verbal malaise is not an all-pervading phenomenon in the NDC?

We have for a long time thought that there are still good men and women in the NDC, personalities who would refuse to descend into the gutters of the country's politics even when pressure is mounted on them to do so.

It is beginning to dawn on us that we might be getting it all wrong if people like Alban Bagbin whom we have held in high esteem because of the position he is holding in our political setting, can open his mouth in such a manner.

Even when a scoundrel holds the position of Minority Leader the deserving reverence should be rendered to him or her.

For an Honourable man, who should be contributing towards the building of a better Ghana, to withhold vital information about those whose activities in narcotic trafficking has done so much damage to our image, to say the least, is most irresponsible.

Alban Bagbin's proclivity to muddying the political waters through such outlandish vituperation is becoming worrisome to our political culture.

At a time when the Police and the entire national security system is seeking to stem the much despised narcotic trade in the country, we deem it criminal for a highly-placed personality like Hon. Bagbin not to assist them in this direction but to lie between his teeth in broad daylight.

One of the conditions put forth by Hon. Bagbin before he would release the “killer” evidence about government officials involved in the narcotic trafficking is a challenge from anybody in government.

Thankfully, no sooner had he made the allegation than Hon. Asamoah Boateng, Minister of Information and National Orientation accepted the challenge.

The ball is now in the court of Hon. Bagbin to prove beyond reasonable doubt that President Kufuor and others in his government are involved in the illicit trade.

From all indications the Nadowli West MP was just opening his mouth the way National Democratic Congress (NDC) elements do when they mount campaign rostrums especially during such desperate moments when elections are but a few weeks away. We await the opening of the can of worms by Hon. Alban Bagbin, failure to do which within the next twenty four hours should tell all Ghanaians that he has desecrated the hallowed seat of Minority Leader and deserves to be impeached.