Election 2008/Ghana: The Nuisance of the Rawlingses 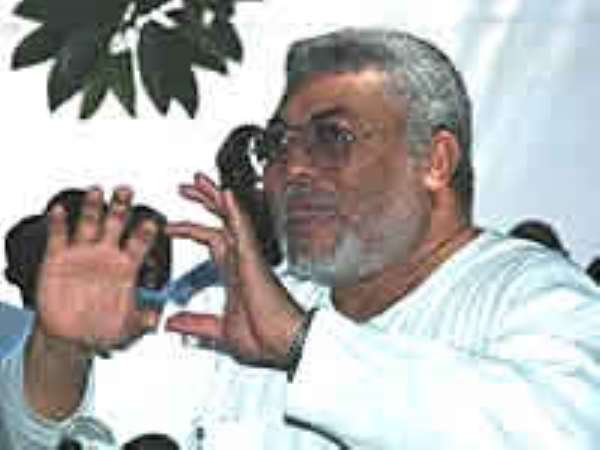 Nana Konadu Agyeman, the hawkish wife of ex-President Jerry Rawlings, has written to the diplomatic community and some international organizations that the impending December 7 general elections will descend into civil war (Daily Guide, 28 October, 2008).

The Rawlingses appear not to have faith in the electoral system (and other state institutions) and have been heckling the Electoral Commission despite contrary view by the rest of Ghanaians and the international community. No doubt, on campaign trails most of the Rawlingses' statements are ridden with violent thoughts, incitements, doom, and unpeacefulness. They rarely talk about issues as to how they will solve Ghanaians' numerous problems some of which have been worsened by them during their almost 20-year rule.

The Rawlings actions reveal the complicated nature and the dilemma of navigating the democratic process in the run-up to the December elections. Part of the reasons for the Rawlingses' complications is that they were formed in high military (AFRC/PNDC) and one-party (NDC-phase 1) political diets part of which ingredients were “recklessness,” “fear,” “harassment,” “doom,” and “panic.”

Talks circulating within political circles are that the Rawlingses, universally known as power-drunk, are bent on coming back to power by using their virtually hand-picked John Atta-Mills, the manipulable presidential candidate of main the opposition National Democratic Congress (NDC), which the Rawlingses own, as a front.

Despite their deniability, the Rawlingses are believed to be plotting a Kenyan-style “power-sharing,” in the event of loosing the December 7 general elections, with the NPP.

From their gloomy imaginations, the Rawlingses think the Election Commission, which was set-up by them and which has repeatedly stated that their system is rig-proof (and has been collaborated by international election experts), will rig the elections for the ruling New Patriotic Party (NPP) and in the ensuing crisis plunge Ghana into bloodshed.

Why the EC will do this in the context of the knowledge that the West African sub-region is still politically shaky and democracy not consolidated is unclear.

How the Rawlingses came by such a disturbing conclusion against the backdrop of various vigilant security structures, institutions, increasingly awakening elites, non-governmental organizations, the watchful mass media, and international bodies' borders not only on profound exasperation but also their disbelief in Ghanaians' civilization and Ghanaians' long-running abilities to conduct peaceful elections for the past 16 years.

The Rawlingses' psychology underpinning such actions is mired in their trademark diatribes, “attacks,” misinformation, “lies,” fear-mongering, chronic complainers, doom-mongering, recklessness, “incitement,” “threats,” and “harassment.” But their current action is incomprehensible. For if any Ghanaian has any grave criminal allegation against anybody or institution, as the Rawlingses claim, you report it to the appropriate state institution for redress, more so as former rulers who should know better.

The Rawlingses actions, whether altruistic or not, is coloured by their incessant heavy heckling of the democratic process, their spiritual wish that the NPP regime is overthrown, and their image that only they can rule a “troubled Ghana” well. This is against the fact that in their almost 20 years rule the Rawlingses, as the Accra-based The Statesman editorialized, had “poor economic management, human rights abuses, murder of innocent Ghanaians, unparalleled corruption, brandishing of AK 47 assault rifles by operatives of the PNDC/NDC governments.”

Though they left power in 2000, they still behave like they are still in power. The Rawlingses have become some sort of monarch of all that survey of the Ghanaian political vista and have established some sort of parallel intelligence network that spy on the ruling NPP and other state structures and private institutions, and use the information to scramble the democratic process.

When Jerry Rawlings called parallel national security meeting with his then ex-security chiefs in his house recently part of the unspoken signal ostensibly was that it was to tell Ghanaians that there are two governments - the Rawlingses and the NPP. No doubt, ever since the Rawlingses left power in 2000, they have been operating some sort of a shadow government, issuing parallel national statements and orders on various state issues in contradiction to that of the state's legal statutes.

Some Western diplomats in Accra are said to be perplexed by the Rawlingses actions in the face of an NPP regime that is stuck in a dilemma and do not know what to do with the Rawlingses' never-ending taunts of the state under the guise of the democratic process that they appear not to understand. Their mentality is more or less still the same old, same old military AFRC and PNDC, and the one-party NDC-phase 1.

The Rawlingses behaviour, in the face of functioning state structures, some of which were either weakened or destroyed under them, looks like the late prominent Afro beat musician, the radical Fela Anikpula Kuti and his outfit “Kulakuta Republic,” which was troubling the Nigerian state to the extent that the then Nigerian government of General Olusegun Obasanjo, through the law courts, banned it as a “republic within a republic” that undermines the existence of the Nigerian state.

Either by providence or accident, the Rawlingses, who ruled Ghana for almost 20 years, is increasingly becoming a troubling issue bordering on helplessness and mindlessness. The Rawlingses have simultaneously become a reflection of Ghana's crudeness, psychic disturbances, and strenuous attempts to refine some aspects of system. Restless, constantly whining, sometimes it appears as if the Rawlingses are the presidential candidates of the NDC and not the boring Atta-Mills. Nana Konadu Agyemang once entertained the idea of ruling Ghana after her husband's term expired in 2000.

At higher thinking, by bypassing traditional rulers, through the National House of Chiefs, the last source of Ghanaians' solace in such grave charges of the NPP rigging the December 7 general elections, Ghana has big problem in dealing with the Rawlingses in maintaining stability and growing democracy.