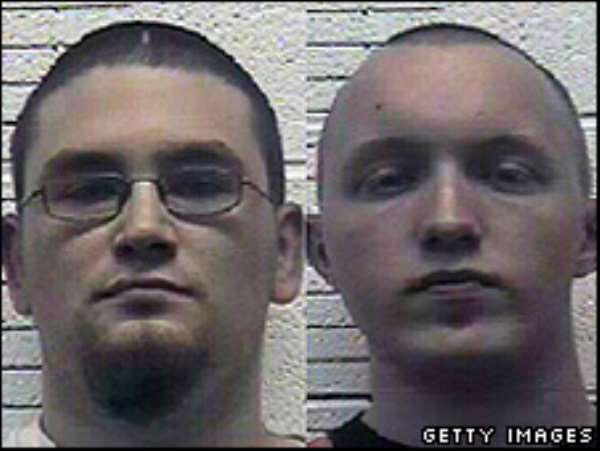 Paul Schlesselman and Daniel Cowart were also charged with possessing an unregistered firearm and conspiracy to steal from a licensed gun dealer.

Mr Obama said he was not worried by the news and it was "not who America is".

He told reporters that "these kinds of hate groups" had been marginalised by the election campaign and were not part of America's future.

Agents from the Bureau of Alcohol, Tobacco, Firearms and Explosives (ATF) said the men, aged 18 and 20, had made their first appearance before a court in Jackson, Tennessee, on Monday after being arrested last week in Crockett County in the same state.

An ATF official said agents had seized a rifle, a sawn-off shotgun and three pistols during the arrests.

The two men have not yet entered a plea but are due to appear in court again later this week.

The pair allegedly planned to rob a gun store and then carry out a killing spree at an unnamed predominantly African-American high school, the Associated Press quoted court records as saying.

Jim Cavanaugh, special agent in charge of the Nashville field office of the ATF, told AP that the two men had planned to shoot 88 black people and decapitate another 14. The numbers 88 and 14 are symbolic in the white supremacist community.

Mr Cavanaugh said the men had sought to go on a national killing spree, with Mr Obama as its final target.

"They said that would be their last, final act - that they would attempt to kill Senator Obama," Mr Cavanaugh told AP.

"They didn't believe they would be able to do it, but that they would get killed trying."

The court documents quoted the two men as saying that they would dress up in white tuxedos and top hats then drive their car as fast as possible toward Senator Obama, shooting at him from the windows.

The BBC's Adam Brookes in Washington says that although the plot seems to have been amateurish and the threat to Mr Obama himself not particularly credible, the US authorities clearly believe that the two had the means and the intent to carry out some kind of attack on black students.

Mr Obama, who if elected will become the first black US president, is leading Republican rival John McCain in opinion polls ahead of the 4 November election.