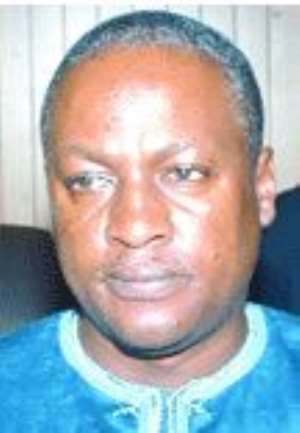 "Professor Mills has been there four times already; how many times has President Kufuor been there in the last two years. Each time that there was problem up north, he (Kufuor) was abroad," he stated.

According to him, Prof. Mills's frequent visits to the northern regions was ample proof that he was strong and waging a relentless campaign contrary to the view expressed by President Kufuor, which purported that Prof. Mills was sick, and therefore could not follow a vigorous campaign schedule.

Mr Mahama said this when he addressed thousands of party faithful and supporters at Agbozume and Aflao yesterday as part of his tour of the Volta Region.

"I am not the presidential candidate of the NDC. Everything I do, I do it in the name of the Prof. Mills and I want us to get that clear.

President Kufuor and his NPP should mind their own business," he told the teeming crowd of supporters.

"Whatever I do, I do it in touch with Professor Mills in case they don't know", he emphasised.

He said that even though the New Patriotic Party (NPP) always described every campaign strategy of the NDC as defective, they always ended up copying those same strategies, citing the door-to-door campaign of the NDC, which, according to him, had been copied by the NPP.

He said that any campaign message or strategy of the NDC which the NPP described as unworkable is a threat to them, adding that "I will continue to campaign as vigorously as I can".

He said the National Health Insurance Scheme (NHIS) was a good scheme but a brainchild of the NDC, adding that when the NDC came back to power, the scheme would be made to operate differently from what the NPP administration was currently doing.

The NPP, he said, did not consult the NDC for their inputs into the NHIS, otherwise it would have been different from what they were doing now, saying the NPP's NHIS was now a district mutual scheme under which every district must have staff whose salaries weighed heavily on the returns of the scheme.

When the NDC takes over, he said, they would introduce an all-encompassing scheme that would address all the anomalies that existed in the NHIS today.

"An NDC government will address your needs irrespective of where you registered and where you find yourself", he stated.

He told the gathering that "NDC is coming back to power and we are promising Ghanaians a once-in-a-lifetime single premium, saying that the NHI Fund has more money and should be able to provide a lifetime premium for Ghanaians.

On the Capitation Grant, he said that despite its implementation, parents were still paying more for the education of their children, thereby giving no meaning to the fee-free education for schoolchildren.

The FCUBE, he observed, was enshrined in the constitution through the efforts of the NDC, stressing that the NPP had to be blamed for wrongfully implementing it.

He said that a presidency of Prof. Mills would ensure that education was free, based on the various needs and programmes, and also promised that under the NDC, schoolchildren would be given free school uniforms.

The Deputy National Youth Organiser of the NDC, Mr Ludwig Hlodze, observed that the NPP had lost touch with Ghanaians and had rather enriched themselves at the expense of the state.

He accused them of insensitivity to the plight of Ghanaians and asked the electorate to vote them out on election day.

For his part, Mr Elvis Afriyie Ankrah, NDC Deputy General Secretary in charge of Operations, called on Ghanaians to remain vigilant on elections day, adding that there was a grand scheme by the NPP to rig the elections and that only vigilance on the part of Ghanaians could prevent that.

According to him, the NDC was the only party that truly understood Ghanaians, and therefore had the plans, policies and programmes that would restore hope and bring smiles on the face of every Ghanaian regardless of tribe, social status or location.