A catfight for votes NANA ADDO's GREAT WESTERN PUSH With one month to the elections, a slew of surveys get scrambled as fresh readings show a lead for the NPP man 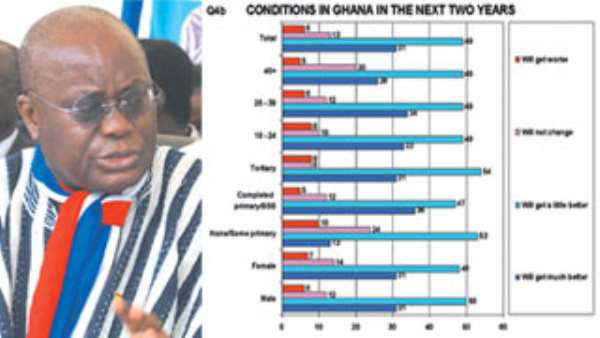 The NPP flagbearer, Nana Addo Dankwa Akufo-Addo, last weekend completed a blitzkrieg in the Western Region designed to crack the hitherto impregnable strong hold of the Ahwois' iron grip (their father's hometown of Sefwi), and initial findings have shown the area tumbling like nine pins.

With the region holding the balance of power, along with the Central region, Nana Addo's campaign, his strategists tell him, has to concentrate his firepower at the eight constituencies that is currently being held by the National Democratic Congress (NDC).

Of the twenty two constituencies in the Western region, the NDC has seen its grip on eighteen, slip to six, with the Convention People's Party (CPP) controlling two.

Now, as the parties go to the home stretch, issues of who will dominate the region electorally, has come to the fore and opened up completely the arithmetic of the region, throwing away all the surveys that have been done by the two parties. Professor Atta Mills waged a vigorous campaign in the region last month, attracting huge crowds, but characteristically staying above the brutal name calling that formed the basis of his predecessor's style.

Days after Mills completed his tour of the region, Akufo Addo did a pincer movement inside the region, and pulled off a dramatic sweep that culminated in the Chief of the Sefwi areas swearing allegiance to the NPP, and by the time he had rounded off Bibiani, Anhwiaso Bekwai, Juaboso, all cocoa growing areas, those constituencies showed clear signs of keeling over to Nana Addo and overturning the odds that seem to go in favour of Mills, only less than a week ago.

One of the highlights of his visit was the 'charm offensive' that he wrought on the traditional rulers in the Western region. Each of the traditional area in these constituencies visited by the NPP flag bearer and the campaign team endorsed Nana Addo and the NPP for the December polls.

Nana Kwesi Kwarteng, chief of Akontombra, chief of Bodi, Nana Osei Sarpong, chief of Bonsu-Nkwanta, Nana Kwaw Asante Bediatuo (II) chief of Asempanaye among others, all endorsed the flag bearer and his party.

What perhaps broke the camel's back was the mounting of the NPP platform by no less a person, than the President of the National House of chiefs, Odeneho Gyepong Ababio (II), who made it clear to his subjects and his traditional area that Nana was a winner.

To be first on the list of communities to be considered under a Nana Ado's regime, he shockingly requested for a district for his traditional area in advance. That was the clearest sign that the NDC's dominance in the Western region had gone. Victor Newman, the usually quiet brain of the team, who is usually low on rhetoric but heavy with figures, grudgingly let The Chronicle in on the recorded conversation in which he made it known that the 'noise' that is being interpreted as support for the NDC flagbearer is merely curiosity, because what is essential for the voters of the Sefwi areas is what affects their every day lives, and how their children will be educated at least at the basic level.

'If they are sick, who will guarantee them hospital attendance with minimum fuss, without the odious Cash and Carry system that used to be the order of the day, when the opposition was in authority'.

'In the top three issues, we trumped them heavily. Those are the issues that touch and concern the lives of the people of the Western region in particular, and the country in general'

Mr. Newman recalled that some of the questions that the professional pollsters asked the people of the Western region and issues that mattered most to them were the high cost of living among others. Among the category of people who answered the questions, 77 out of 80 percent polled, said the issues that needed addressing were the high cost of living, followed by unemployment, 62 out of 80 percent, with the issue of poverty and finally corruption. In all seventeen questions were posed with the issue of low tolerance of opposing views, police brutalities, teenage pregnancy and the decline of Ghana's image and cost of health care, taking a distant position in the issues league.

In an unusually long discussion, Mr. Newman took The Chronicle through the survey's findings on issues that mattered to the electorate, whether they had hopes of seeing the fulfillment of those hopes in the next two years, that is in 2009 and 2010, and which candidates they had hopes of voting for in the general elections when the dust is settled, and the battle is fought.

Surprisingly, the numbers went in favour of the NPP flagbearer. The issues that are dear to the heart of the metropolitan dwellers and the elite are different from those that impinge on the rural dwellers, he noted.

What happened in those constituencies was sheer amazement, when Nana Addo mounted platforms to spell to cocoa farmers in the communities about his vision for the Ghanaian farmer, especially in the cocoa industry. It was a message that seems to have received thunderous applause in every community, hamlet or town visited by the eloquent flag bearer and his campaign team.

He told the cocoa farmers that his administration would not only continue with the good works of the sitting president, John Agyekum Kufuor, by increasing cocoa prices and paying their bonuses annually, which had been done by the President in the last seven years. Nana said he was going to create a Pension Scheme for the cocoa farmer to cushion him after his retirement. Cocoa would continue to enjoy right prices, and partake in the fair share of the returns.

The current position of Ghana as the second largest producer of cocoa in the world, he said, would change under his reign so that Ghana would reclaim her top position as the number one producer of cocoa. This, he said would be done by increasing the current production from 750,000 tons to 1000,000 tones by 2010. Currently, he said the NPP administration in the last seven years increased the price of cocoa from GH¢25 to GH¢75, and currently pegged at GH¢102.

Because of this, I am coming to complete the unfinished agenda of the NPP for the Ghanaian cocoa farmer”, Nana Addo promised. Not only would the cocoa farmers enjoy bonuses under his reign and the increase in prices, he assured that 70% of the product would be processed in Ghana to add value to the product. For him, no government can match the NPP administration in terms of records in the cocoa industry.

An obvious reason he said should be able to get the NPP the needed votes in all the cocoa growing areas of the country. He has therefore launched 'operation win all' for the five seats in the Sefwi areas, currently being occupied by the NDC. The majors in the fight for dominance in the Sefwi areas include Professor Frimpong Boateng, chairman of PURC, Deputy Western Regional Minister, Kwasi Blay and former Minister of Health, Dr. Kwaku Afriyie, were all introduced at various levels of the campaign in Sefwi, representing a united force of the Sefwis in the NPP, expected to work with the flagbearer.

Nana Akufo Addo, also spelt out his vision for the Ghanaian child in the education sector, which is to generalize the school feeding programme currently being done on a pilot base, the capitation grant which is currently covering all public schools at the basic level, he indicated his readiness to move the mitigation programmes upward, to cover all public Senior High Schools in the country. All these were lauded by the people with applause.

Interestingly, the human rights of the Ghanaian, which the latter is noted for protecting over the last 30 years of his political career was also mentioned as one of the unprecedented records of the NPP that would be upheld under his administration.

Nana Addo pointed out “Nobody has been touched by our administration, without the due process of the law being followed, because we believe in the rule of law and we are working to ensure that people continue to enjoy the totality of freedom in this country” Now the battle for the CPP's votes, which is being contested by the NPP's Catherine Afeku and Mr. Bwah in Ellembele where Hon. Blay is contesting on the CPP's ticket, despite the brouhaha. Hon. Blay, by his arrangement has started distributing his T shirts and is back in contention for the Ellembele seat, though his ambition to be speaker is being fiercely contested by lawyers within the NPP, who are angling for the position.

With Nana Addo now flattening the NDC strongholds, the battle has now been shifted to the CPP seats where NPP is determined to win the chunk of the votes. Unlike the previous agreement where NPP did not contest the Evalue-Dwira and Ellembele seats, the party has this time decided to field Mrs Catherine Afeku to contest the Evalue-Dwira seat. No firm decision has, however, been taken regarding the Ellembele seat. Freddie Blay is contesting the seat on the CPP's ticket.