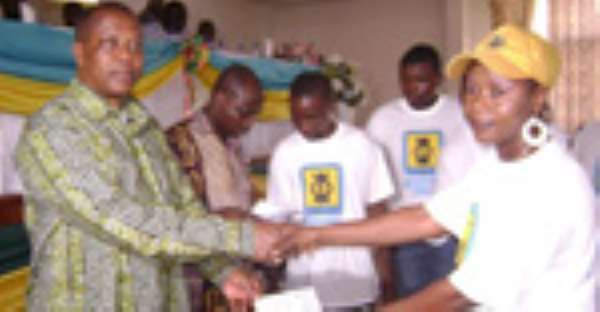 THE ASHANTI Regional Branch Office of Micro Finance and Small Loans Centre (MASLOC) last week started disbursing funds to people in various districts of the Ashanti Region who applied for the facility.

Since the official disbursement of loans to beneficiaries began a couple of months ago, officials of the Government Loan Facility have concentrated attention on serving approved applicants in the Kumasi Metropolis.

To make the disbursement process effective in serving the ultimate purpose of the scheme, officials of the facility sub-divided the twenty-six districts in the Region into three zones.Each of the zones is headed by MASLOC officials of a selected district.

Nine districts have been combined to form Zone One and is headed by officials of Fomena-Adansi North District, while Mampong Sekyere West heads Zone Two which is also made up of nine districts. Zone Three spearheaded by Tepa-Ahafo Ano North has eight Districts linked together.

The Chief Executive Officer (CEO) of MASLOC, Mr. Lawrence Akwasi Prempeh, with the able support of officials in the Region under the leadership of Mr. Joe Appiah, took turns to launch the programme in the district capitals of the chosen districts.

The theme of the launch was, “A New Approach to Economic Empowerment through Micro Finance”.

In the entire three zonal launch, the CEO of the scheme presented bank slips to 3,959 beneficiaries to cash their approved loans from the banks.

A colossal amount of GH¢ 740 000 (7.4 billion old Ghana Cedi) was released by officials for the disbursement of funds to beneficiaries in the three zones.

Speaking at the Zonal Launch in Tepa, the capital of the Ahafo Ano North District on Thursday, Mr. Lawrence Prempeh said he was happy that finally his outfit has succeeded in disbursing funds to beneficiaries in thedistricts.

He noted that very soon district disbursement in other Regions will commence to ensure that every Ghanaian in any part of the country was given the opportunity to access the facility.

“Now that MASLOC disbursement has commenced in the districts, our quest, as people to fight poverty and create wealth through economic independence, can be achieved across board”, the CEO contended.

He cautioned beneficiaries to always be mindful of the fact that the facility was not a gift, but a repayable loan within a time period.

Mr. Prempeh therefore advised them to use the loans in income generating ventures so that they would not only improve upon their living standards but also be able to repay the loans on time.

“One basic thing, the beneficiaries should also know, is that the fund is a revolving one, therefore the sustainability of it depends on the rate at which loan receivers repay their loans on time to enable a lot more people to also benefit from it” he explained.

The CEO encouraged people who have not yet applied for loans from the centre to do so, stressing that political affiliation, sex, religion or tribe was not considered a criteria for accessing the facility.

Mr. Prempeh categorically stated that application forms and other processes leading to the assessment of the facility were absolutely free.

He therefore enjoined the people to hurriedly report any officer of the centre who tries to extort money for forms and other processes to the police so that the appropriate punishment could be prearranged for him.

MASLOC, an initiative of the ruling New Patriotic Party (NPP) Government, was launched by President J. A. Kufuor in 2006 to provide Micro Credit and Small Loans to Small and Medium Enterprises to give them the platform to grow and expand.