NDC To Shake Up Police Service 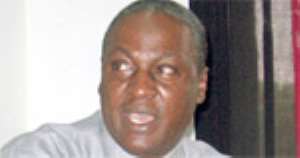 OPPOSITION NATIONAL Democratic Congress (NDC) has promised to shake up the Ghana Police Service (GPS) by equipping it with the latest of communication gadgets and other facilities to be able to deal with the spate of armed robbery in the country if given the nod come December, 2008.

John Dramani Mahama, the running mate to Professor John Evans Atta Mills said this on Monday to enthusiastic crowd at Bechem in the Brong Ahafo Region on his first day of a 10-day-tour of the region.

Mr. Mahama's tour of the Brong Ahafo region adds up to the fifth region to be visited by the NDC's running mate since his nomination. The other regions already visited were Northern, Ashanti, Upper East and West Regions.

According to the Bole/Bamboi MP, Ghana has one of the best Police Service in Africa but the problems of the Service has made the Service inefficient in dealing with crime, especially armed robbery.

He consequently declared that the NDC would wage relentless war on armed robbers until they were completely dealt with.

Mr. Mahama sent a strong signal to armed robbers to take cover since the party would use all resources within its powers to deal with the armed robbers so that Ghanaians and foreign nationals would feel safe doing business in the country.

The running mate assured the people of the Brong Ahafo Region that the NDC would continue with the developmental agenda of the country with particular focus on the region since it is the “bread basket of the country,” an accolade the NDC was noted for before losing power to the NPP.

Mr. Mahama promised to help revamp agriculture in the region by providing subsidized inputs to farmers, adding that the road network would be improved especially the Bechem-Akomadan road to ease the transportation problems in the region.

Some of the issues the party promised to tackle when voted into power included better condition of life for Ghanaians, which he said would not be rhetoric but practically felt in the “pockets of the ordinary people”.

On other issues of national concern, Mr. Mahama rubbished the recent National Awards bestowed on some prominent people, describing it as mishandling of the country's resources.

He furthered that the decision of the NPP government's buying of two presidential jets and the building of a presidential palace showed how insensitive the government was as those resources could have been used to provide social amenities to majority of Ghanaians who live in deplorable conditions.

He appealed to party faithful to remain steadfast and resolute since the party would win the December 7, 2008 elections.

Mr. Mahama used the occasion to introduce the Parliamentary candidate, Mr. Kwadwo Owusu Agyemang, who would be contesting the Tano South seat on the ticket of the NDC.

Earlier on arrival, Mr. Mahama and his entourage paid a courtesy call on Bechemhene, Nana Fosu Gyaebuor II, at his palace.

Other areas that Mr. Mahama and his entourage visited were Tano South; Duayaw Nkwanta; Bomaa and Sunyani.

The following people 'Commander' Opoku Atuahene and Justice Samuel Adjei were also introduced as parliamentary candidates vying the Tano North and Sunyani East constituencies respectively on the tickets of the NDC.