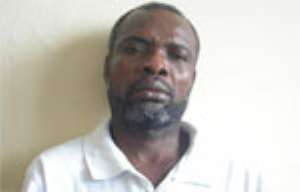 A 46-YEAR old man resident at South La Estate, Emmanuel Ali has been arraigned before an Accra circuit court B presided over by Justice Idrisu Mahamadu for dealing in India hemp, popularly known as 'wee'.

Ali, who was accosted by personnel from the Narcotics Control Board (NACOB) whilst selling the substance to attendants at Jokers Night Club in Accra, had in his possession 63 bundles of dried leaves suspected to be wee.

Narrating the incident to DAILY GUIDE, the La Police Commander, DSP Richard Gyebi said on June 27, 2008 at about 11pm, personnel from NACOB went on surveillance duty at the Jokers Night Club.

While there, they saw Ali attempting to sell some substance they suspected to be India hemp to the club attendants.

The NACOB personnel then rushed on him and arrested him, and a search conducted on him revealed 63 bundles of leaves wrapped in a white and brown paper in his pockets.

He was sent to the La Police Station where he admitted the offence in his caution statement.

Ali was subsequently charged with the offence before the Circuit Court B where the presiding judge, Justice Idrisu Mahamadu adjourned the case to today, July 16 to enable the police access the forensic report.