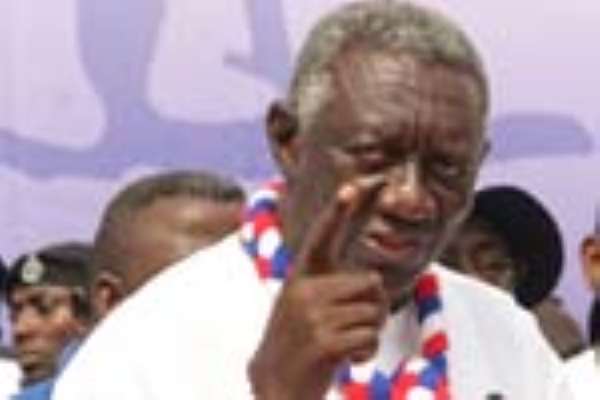 Nana Addo Dankwa Akufo-Addo, presidential candidate of the New Patriotic Party (NPP) was yesterday gripped by the spirit of Ghana's development when he yelled in Hausa, “Zaamu gaba”- (We are moving forward) - to a sea of human heads at Kasoa in the Central Region.

Nana Akufo-Addo said this while addressing party faithful in the Central Region market town during his outdooring as the presidential candidate of the ruling party.

He preceded his presentation with a call for a minute's silence as a way of expressing gratitude to God for his kindness to the country.

With excitement clearly visible on his countenance, he said Ghana was on the threshold of prosperity, adding that the recently discovered oil in the country was as a result of strategic efforts on the part of government.

The about $15billion to be derived from the oil proceeds in the first five years of the crude oil export, he noted, would be used in the development of the country and not to line his pocket or that of members of his government.

He paid tribute to the duo of President John Agyekum Kufuor and Vice President Alhaji Aliu Mahama for taking Ghana to its present level of development.

Their dedication and commitment to the progress of the country, he said, had made Ghana a model of international respectability and a place where freedom was flourishing.

“Ayekoo to President Kufuor and Alhaji Aliu Mahama,” he remarked.

The way for Ghana's progress, he pointed out, was in the laying of proper structures for the rule of law to thrive.

He underscored the importance of having every child in Ghana access good education and for the existence of a modern economy.

The NPP presidential candidate revealed his plan to see every region obtain a public university.

One of the priorities of his government, he emphasized, would be correcting what he described as the injustice of the wide gap between the North and South so development could be even.

This, he added, could only be achieved when there was peace in the country, pointing out that he was determined to turn the Northern Region into a bread basket of the country.

The presidential candidate dropped hints about how he intended to see the country industrialise and avoid being an importer of raw materials.

According to him, it was his dream to have the country establish light manufacturing industries in the next 10 years.

The presidential candidate said elections were about the expression of opinions and not war. He prayed the Electoral Commission (EC) to put the right structures to facilitate free and fair elections so that whoever loses in the December elections would accept the verdict.

In the humour-packed delivery, he said, “We know those who are going to lose the polls.”

Nana Akufo-Addo did not have kind words for those who wanted to create chaos in the country, pointing out that “they cannot influence the course of our country's history”.

Turning to the sea of human heads, he said with the massive turnout “I know that I am in the Flagstaff House already.”

Many hours before President Kufuor and Nana Akufo-Addo turned up at the function, the Kasoa market was bursting at its seams, with security agents struggling to manage the situation.

There was no doubt that the organisers had underestimated the sheer number of party faithful that would troop to the venue of the mammoth rally.

President Kufuor condemned those who talked about qualifications as though such things mattered when it came to ruling the country.

He explained that all that mattered in ruling a country was having the nod of Ghanaians to do so.

This was the first verbal reaction of the President to Mr. Jerry John Rawlings' recent outburst in which he said the Number One Citizen was not a lawyer.

On the recent oil find in the country, he described as a lie the assertion by some politicians that it was during their tenure that the resource was discovered.

The NPP administration had brought wonderful development to the country, he disclosed, pointing at the road network strewn across the length and breadth of Ghana.

Tamale, the Northern Regional capital, he said, was today the most beautiful in the country, adding, “It was not like that seven and half years ago.”

Taking a swipe at those who said Akufo-Addo was not a lawyer, he emphasised, “Akufo Addo is a lawyer!”

Describing the action of those making such remarks as playing the game unethically, he remarked, “They are no longer boxing but biting in desperation. We would beat them thoroughly in December.”

Still on Mr. Rawlings' scathing remarks, President Kufuor said, “It is for the sake of peace that we do not respond to some of these utterances. Otherwise we have a lot of things to say about them.

“The NPP government has laid a firm foundation for the progress of the country. There is therefore the need for a good government to continue.

If we do not have such a government to continue what we have already done, there would be retrogression, so vote for the NPP,” he said to a thunderous applause from the teeming crowd.

He condemned what he described as lies about the recently discovered oil in the country when he said the resource was discovered through the provision of funding for the exploration.

“They were squandering money during their tenure ostensibly looking for oil. They are lying,” he said, adding that the search for oil started under the Busia regime but the efforts were stalled with the overthrow of the government by the Acheampong coup d'etat.

“The resource simply vanished but resurfaced under our administration,” he intimated with a touch of humour.

Continuing, he said, “We do what we say we would.”

Elections, he observed, were about institutional leadership, adding that in West Africa Ghana had earned a certain reputation in that regard.

In his absence, he pointed out, the NPP had many alternatives who could lead the country, obviously referring to Nana Akufo-Addo and other party stalwarts.