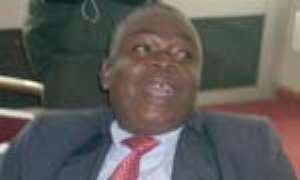 THE VOLTA Regional Police Command is taking legal action against the Member of Parliament (MP) for Ketu North, James Avedzi, for making false allegations against the Volta Regional Minister, Kofi Dzamesi and the Police.

The NDC MP was reported to have alleged on May 17, 2008 at the inauguration of TEIN at Ho Polytechnic that the Regional Minister and the Police had hatched a plan to disrupt the forthcoming elections in the Ketu North constituency, where he is contesting the Minister.

Mr. Avedzi is expected to be charged with raising false alarm and threatening national security.

DCOP Bernard Dery, the Regional Police Commander, who disclosed this at the Regional Meet the Press series in Ho on Thursday, added that the docket on the case had been forwarded to the IGP, after which the Police would recommend that he (Mr. Avedzi) be arraigned before court.

The Regional Commander said the legal action has become necessary following Mr. Avedzi's failure to heed calls to present himself for questioning by the police in connection with the allegations, with the reason that he (Avedzi) could not appear before a body made up by Mr. Dzamesi and the Police whom he mentioned in the allegation.

DCOP Dery maintained that the police have never hatched any plan in collaboration with the Regional Minister to disrupt elections in any part of the region, warning that if the MP was not prepared to openly clear the air and apologise for such unfounded and baseless allegation, he would be summoned to court to provide proofs.

“I want him to take the best lawyer to help him substantiate the allegations,” he stated.

He said by such allegation the MP was trying to incite his constituents against both the police and the Regional Minister, a situation which could undermine peace during the election.

The Regional Commander said there were two ways of instituting criminal proceedings under the country's laws, and since Mr. Avedzi had failed to assist the police in their investigations by refusing to honour their invitation, he must be made to face the law.

Earlier in an address, Mr. Dzamesi said conflict was one of the factors that hindered development in some parts of the region, and disclosed that government was giving the needed assistance to the Regional Security Council to effectively manage conflict situations in the region.

He announced that government had released an amount of GH¢40,000 to the Nkonya-Alavanyo Conflict Resolution Committee to facilitate the peace building process going on in the area.

Mr. Dzamesi stated that it was heartwarming that out of the numerous cases of conflict such as the Tsito-Peki dispute, the ARS conflict and the Anlo Awomefia chieftaincy dispute, lasting solutions were found to the Nkonya-Alavanyo one, thus making way for development in the two areas.

According to him, the two communities are currently demarcating their boundaries for the final determination of the actual boundary by the conflict resolution committee, stressing that this move was expected to put a stop to the land dispute.

He stated that as a result of the prevailing peace in the area both communities have begun benefiting commonly from development projects; significant among them were GETFund projects and the construction of the link road from Gbi-Wegbe through Alavanyo to Nkonya, which had been awarded on contract, adding that the second phase of that project would soon be awarded for rehabilitation.

Mr. Dzamesi urged other conflict-prone communities to emulate Nkonya-Alavanyo's example and allow themselves to be used as agents of change in dispute and conflict situations.

Commenting on the road sector, the minister revealed that the Volta Region was immensely receiving more resources for road construction than any other region in the country, saying no government had ever done that much for a region like the NPP government.

He mentioned that a total of 3,213 kilometres of feeder roads had been constructed while the total length of engineered roads and partially engineered ones stood at 2,236 kilometres and 345 kilometres respectively.

The government, Mr. Dzamesi said, would soon receive an amount of $50million from the EU for the construction of the Kadjebi-Nkonya-Bimbila road to facilitate the transportation of goods and services from the northern part of the region.

On poverty alleviation and employment generation, he stated that over GH¢1,373.00 had so far been disbursed to 3,217 beneficiaries under the Micro-Finance and Small Loan Scheme (MASLOC), while 13,981 people had been employed under the National Youth Employment Programme (NYEP).

The Minister said in recognition of peace as the prerequisite for attaining all its visions, the Regional Coordinating Council was liaising with the security agencies in the region to ensure peace during and after the forthcoming elections.

The Ho Municipal Chief Executive, Mawutor Goh, responding to a question on the shoddy nature of newly constructed roads in the area, appealed to the consultants on those projects to help ensure efficiency.