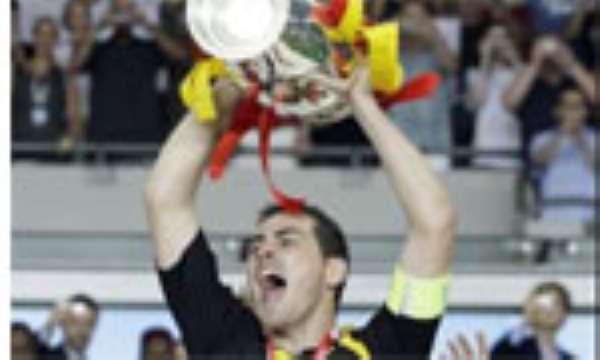 Spain ended their 44-year trophy drought by deservedly beating Germany 1-0 thanks to Fernando Torres' first-half strike in an entertaining Euro 2008 Final in Vienna on Sunday.

Three-times winners Germany had spluttered on their way to the final, particularly against Croatia and Turkey, and they were second-best for long periods against Luis Aragones' impressive side.

After his injury scare, Germany captain, Michael Ballack started the match while for Spain, the tournament's top scorer, David Villa, missed out as Cesc Fabregas began in midfield.

Spain were nervous in the early stages with Germany settling the better and Thomas Hitzlsperger had the first effort on goal that was easily gathered by Iker Casillas.

However, when Spain did finally get into their stride they almost took the lead in the 15th minute when Andres Iniesta's cross hit Christoph Metzelder and was heading towards goal until Jens Lehmann pulled off a fine reaction save. Eight minutes later the Spaniards went even closer to breaking the deadlock when Fabregas picked out Sergio Ramos whose cross was headed against a post by Torres with Lehmann beaten.

Spain did score the crucial first goal just after the half-hour. It seemed that Torres was chasing a lost cause but Philipp Lahm inexplicably stopped chasing the ball, allowing the striker to clip a shot over Lehmann and into the back of the unguarded net.

It was very poor defending by Lahm who has not had the best of tournaments.

When Spain responded an unmarked Sergio Ramos appeared to have doubled their lead but Lehmann made a fine one-handed stop while Torsten Frings was forced to knock Iniesta's shot off the line.

With eight minutes left Marcos Senna was centimetres away from making it 2-0 after substitutes Santaigo Cazorla and Daniel Guiza had created the chance by carving the German defence open again.

Joachim Low's side failed to put any pressure on the Spain defence in the closing stages as Aragones' side fully deserved their narrow success.