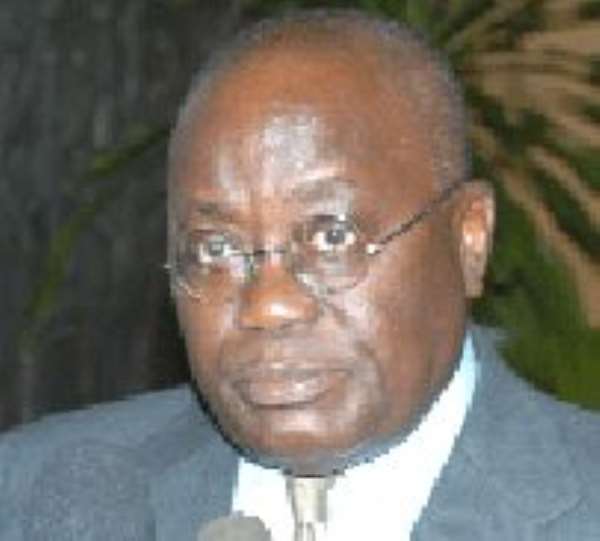 The flag bearer of the ruling New Patriotic Party (NPP), Nana Addo Dankwa Akufo-Addo, has vowed to transform Ghana into a free modern nation in which all will be affluent.

Addressing a fully packed audience in Accra yesterday, he declared, “The NPP government under President John Agyekum Kufuor has given this nation its best economy in our half-a-century of independence” and pledged to lead a team that would build on the solid foundation laid to transform the country from a developing one into First World within this generation.

Nana Akufo-Addo had taken his turn at an “Evening Encounter” hosted by the Institute of Economic Affairs, Ghana, under the auspices of the Ghana Political Parties Programme (GPPP).

The encounter is for the four political parties with representation in Parliament, namely, the NPP, the National Democratic Congress (NDC), the Convention People's Party (CPP) and the People's National Convention (PNC).

Already, the CPP and NDC presidential aspirants have had their turns and the PNC aspirant is due to have his turn on July 15.

Nana Akufo-Addo pointed out that this year's elections were truly historic for the nation because they offered an opportunity to fundamentally improve the lives of Ghanaians.

He said the choice was whether to move forward with the NPP or go back to the NDC, citing clear differences between the two in terms of records in government, performance, vision for the future and the capabilities of their presidential aspirants.

Advancing arguments in support of why the NPP should be retained in political power, the NPP flag bearer pontificated, “I urge that you judge us in this election based on what we have done, what we are doing and what we are going to do.”

Cataloguing the NPP's achievement, he proudly stated that “we have achieved macro- economic stability for the longest period in our history and reduced significantly both interest rates and inflation, while nearly quadrupling the size of the economy to $15 billion in the first seven years of the NPP rule”.

He said under the NPP administration, the country had worked hard to wean itself off the financial dependence of the World Bank and the IMF and it was enjoying a sovereign credit rating of B+ and the ability to borrow on the open financial markets on its own.

“Indeed, last year, our first sovereign bond issue which was for $750 million was over-subscribed to the tune of $3.2 billion.

This, coupled with the increase in foreign direct investment, the selection for the Millennium Challenge Account and increased remittances are all testaments to the successful management of the economy,” he stated.

Touching on his vision for the country, Nana Akufo-Addo said he was ready to transform the structure of the Ghanaian economy, consolidate democracy and fully engage the country in the agenda for regional and continental integration and promote a common interest in the global arena.

He said he would focus attention on the process of decentralisation by continuing the creation of new districts, increase the District Assemblies Common Fund to 10 per cent of GDP, as well as increase the control of district assemblies over their staff.

He said with greater urgency, an NPP administration under his watch would reform the public sector to make public services more efficient, transparent and customer friendly.

He, however, indicated that the nation's potential was seriously diminished by the pervasive habits of tardiness and the lack of professionalism.

In that connection, he said the country could not be a democracy when its citizens honoured the law in breach, when they feared the night because of criminals or died unacceptably on the roads that had become lawless spaces.

“My administration will double the Police Service to 50,000 in the next five years, while committing more resources for training, better pay and technology to increase professionalism and accountability of the service,” he said.

He also gave the assurance that the housing needs of the people would be tackled and committed his government to the construction of 50,000 units per year at GH¢20,000 per unit for the next five years to complement the delivery of housing by the private sector.

“This will cost a total of GH¢1 billion and 20 per cent of this will be committed to renting by families that cannot afford to buy those houses,” he added.

Other areas he would tackle include quality education, public health system and clean drinking water. He would also inject discipline into the Ghanaian society.

He also pledged to fight corruption, using his over 33 years of exemplary political working life as a benchmark.

Earlier, the IEA Administrator, Mrs Jean Mensa, in a welcoming speech, wondered why, since independence, the country's infrastructural development had been barely marginal; the agricultural sector still growing at subsistent level and the economy so vulnerable.

She, therefore, called for home-grown solutions to the problems confronting the nation.