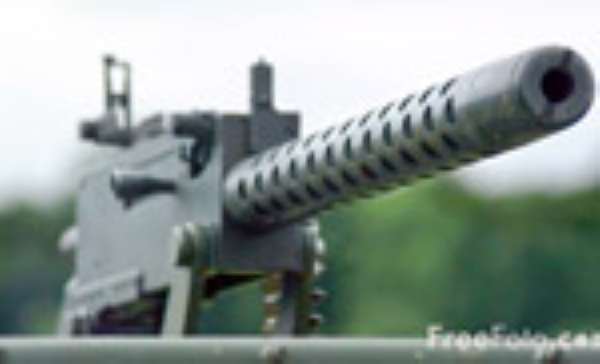 RAGING GUNSHOTS and sporadic killings appear to be the order of the day in Bawku as efforts at calming down the rising tension in the municipality seem to be failing after last Saturday's bloody incident.

The warring factions have failed to shield their weapons and were rather going for vengeance killings, leading to the re-imposition of a 22-hour curfew (from 9am to 7am).

A resident claimed that he had lost seven of his family members, saying he was therefore left with no option but to seek revenge.

The situation is so delicate that a reported visit yesterday by the Inspector General of Police (IGP), Patrick Kwarteng Acheampong to the conflict zone was called off at the last minute.

Since Monday evening through to the early hours of yesterday, residents of the area were bombarded with sounds of sporadic gunshots which are yet to be traced to a particular group.

According to the security agencies, which appear to be overstretched, the curfew should calm down the tension and reduce the constant gun-fight which is almost becoming the order of the day since Sunday when 11 people were reportedly killed.

The constant gunshots from local warlords made the presence of security agents insignificant.

A source close to the authorities in Bawku hinted that the renewed 22-hour curfew would help the security agencies carry out some search in the whole traditional area.

From Saturday 21st to Sunday 22nd June, over 13 gruesome murders were recorded in the municipality while a total of about 20 persons sustained various degrees of injuries and were rushed to the Zebilla and Bolgatanga hospitals since the Bawku Presbyterian Hospital has virtually become a no-go area, becoming very dangerous for patients and health workers.

Unconfirmed reports reaching DAILY GUIDE say at least two dead bodies had been seen in the area following the resumption of shooting on Monday.

Some 50 individuals who were rounded up by the security personnel for screening in connection with the two-day killings have been released but are under security monitoring, according to a source in Bawku.

As at the time of filing this report, no one could go out of his house, and there was no vehicle travelling through the municipality, with hundreds of people reportedly fleeing to neighbouring Togo and Burkina Faso.

An attempt to burn down the Bawku Police Station was foiled by a joint military and police patrol team, but reports say two bungalows belonging to the district hospital had been burnt to ashes.

According to Eugene Osafo-Nkansah of Peace FM the perpetrators of the weekend brutal killings were camouflaged in military attire.

This was revealed when Kwame Sefa-Kayi, host of Peace FM's morning show spoke to a victim who lost about seven members of his family in the latest hostilities between the Mamprusis and Kusasis.

Narrating his story, Mumuni Alhasan who is from the Kusasi tribe confirmed the decapitation of 12 people.

He said he was in the house when six men dressed in military uniform confronted them and started brutalizing them.

This was after reports that a man from the other faction had been murdered.

He said he fled, and when the situation came back to normal, he returned to see about 11 people dead with their heads chopped off.

Among them were seven members of his family, including his grandmother, his mother and siblings.

When asked why they were fighting, Mumuni could not give any particular reason, but said there is a festival they celebrate every year and this year's celebration brought the tension between the two tribes.

Pushed as to what he would do if he meets someone from the Mamprusi gate, he said: “In the same way they attacked and killed my family members like goats and fowls in my house for committing no crime, I will also revenge the death of my family members if I meet anybody who is a Mamprusi.”

Prof Naana Jane stings NPP on Corruption: 'Not even family i...
11 minutes ago