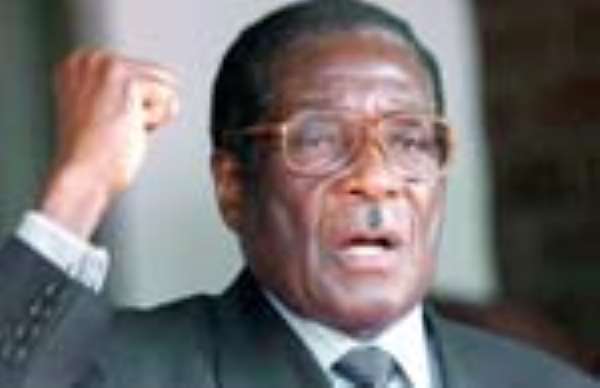 Members of Ghana's Parliament yesterday put all diplomatic niceties aside and took Zimbabwean President Robert Mugabe to the cleaners for the acts of violence his ZANU-PF party has been visiting on its political opponent, the Movement for Democratic Change (MDC) and its supporters.

The MPs, in very unequivocal terms, called for external military aggression preferably from the African Union and other like-minded bodies, to save the country from further catastrophe in the name of freedom.

The law-makers therefore called on the international community to intervene immediately to redeem the suffering masses from the dictatorial grips of Ghana's former in-law.

Robert Mugabe, who led Zimbabwe to independence, stayed in Ghana in the 1960s when he taught in Sekondi. He married Sally, a Ghanaian, who later died and was buried in Harare.

The Ghanaian parliamentarians' fire and brimstone condemnation followed a statement on the crisis in Zimbabwe made on the floor of the House by the Dome-Kwabenya MP, Professor Mike Oquaye, whose call coincided with President J.A. Kufuor's appeal to his counterpart to let peace prevail in the Southern African country.

President Kufuor appealed to the Zimbabwean leader to, as a matter of urgency, resort to all necessary peaceful and expedient means to cause an immediate cessation of violence and mayhem in the country.

He said the leadership should also consider the release of all political prisoners as a sign of goodwill and national reconciliation, besides pursuing dialogue between the government and all the opposition parties to achieve a conductive environment for free, fair and transparent elections in the country.

In a release signed and issued by the Secretary to the President, Ambassador D.K. Osei, President Kufuor expressed concern about the deteriorating political climate in Zimbabwe as it prepares for a run-off of Presidential elections scheduled for Friday, June 27.

Adding his voice to the international community's over the current violence in that country, President Kufuor called for support for mediation efforts by regional and continental leaders.

He maintained that a return to dialogue and negotiations between Zimbabwean party leaders was the only viable means to resolve their differences before the election run-off.

'Otherwise the integrity of the electoral process will be gravely dented.”

The Opposition leader, Morgan Tsvangirai last Monday took refuge in the Dutch embassy in the capital Harare because of fears for his safety, soon after he announced on Sunday, his withdrawal from the presidential race to avoid more bloodshed.

President Mugabe has accused the MDC of lying about political violence ahead of the presidential run-off.

Back in March, when the first round of voting took place, Mugabe was humiliated by being beaten into second place in the presidential race, and by losing the parliamentary election outright.

The UN Security Council on Monday condemned the violence that recently engulfed the country's politics preceding the run-off election and called for immediate redress.

Zimbabwe has been a subject of discussion the world over for various acts of human rights abuses against supporters of the MDC, the strongest opposition party, said to have won the last March presidential and parliamentary elections, which Mugabe ignored.

The world was stunned to learn that Mr. Tsvangirai announced on Sunday that his party was withdrawing from the presidential run-off because the level of violence and intimidation had “extinguished any chance of free and fair elections.”

Prof Oquaye, a former Political Science lecturer at Ghana's premier university, called on Africa and the rest of the world to act decisively on the Zimbabwean issue before it was too late.

“Africans should particularly rise in unison and dissociate the African race from all such actions which lower our esteem in the eyes, ears and minds of right-thinking humanity.

Our globe has gone beyond the era when state sovereignty and non-interference in the internal affairs of a country were employed to abuse human rights in any given nation.

“It is time Africa did something meaningful about the AU,” said Prof. Oquaye, popularly called Apparatchik by his colleagues.

The Dome-Kwabenya MP, also a Baptist priest and lawyer, called for a full-fledged Africa Court on Human Rights and Electoral Matters, which would have sub-regional courts.

“It will have full adjudication authority on electoral affairs within nations and human rights abuses.”

According to him, “African leaders cannot sit quiet anymore. Let us act now and defend these innocent Africans. We must send a peace-keeping force at once, backed by the UN.

Free and fair elections should be held. Please, save Zimbabwe from human degradation, poverty, misery and disease. The dignity of Africa is at stake.”

The majority leader in Parliament, Abraham Ossei-Aidooh, who described Mugabe's behaviour as the 'highest form of impunity and impudence', called for foreign military action to resolve the crisis. “For once, if even it needs foreign invasion, it should be.”

According to him, no matter how much Zimbabweans are brutalised, they themselves could never rise up against the system as Mugabe used various means to repress and suppress dissent.

Zimbabwe, he said, was a failing country as every facet of its life had fallen apart to the extent that even “MPs and judges are all traumatized”.

The minority leader, Alban Bagbin, like his majority side colleague, condemned the gratuitous violence and harrowing suffering in Zimbabwe, which gained its independence in 1980 from the British.

“We can no longer allow this stupidity of Mugabe to continue and so we must come out and stop it right now.”

He called on African leaders not to look on with indifference while innocent blood was shed in the failing nation.

“All should act quickly. It is not an issue of Zimbabwe, it is about Africa.” Both Bagbin and Ossei-Aidooh, who were in Zimbabwe a few years ago on national assignment, related some of the indignities the citizens were subjected to.

Deputy Interior Minister Kobina Tahir Hammond said “nothing can justify the foolishness of Mugabe. The full force of continental Africa should be brought to bear on Mugabe and his cabals.

“Let us condemn it in the strongest possible terms. Today it is Zimbabwe. Who knows where the next nonsense will be coming from?”