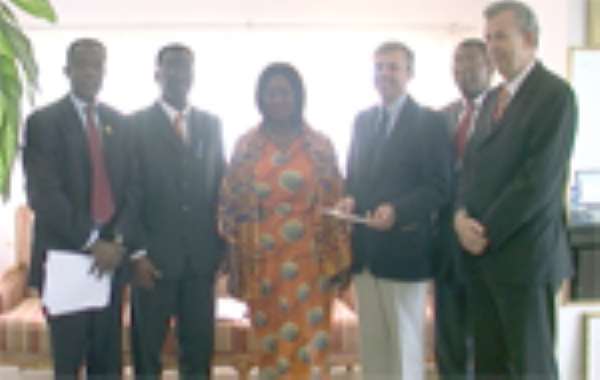 GOVERNMENT HAS bought over the final 10 percent shares of the Volta Aluminum Company (VALCO) from ALCOA to become the sole shareholder of the flagship Industrial Company set up in collaboration with Kaiser of USA in the immediate post independence era.

Transfer of the shares to Ghana Government was done at the Castle, Osu, at a short ceremony during which the Director-General of ALCOA, Jens Kallmeyer presented the share certificate to Kwadwo Baah-Wiredu, Minister of Finance and Economic Planning.

Mr. Baah-Wiredu in turn presented a banker's advice for an amount of $2m being the total cost of the 428,000 ordinary shares to Mr. Kallmeyer.

A statement issued from the Castle yesterday and signed by Andrews Awuni, Press Secretary to the President said the ceremony was attended by Mrs. Mary Chinery-Hesse, Chief Advisor to the President; the Attorney-General and Minister for Justice, Hon. Joe Ghartey; and Dr. Charles Mensa, Chief Executive Officer of VALCO.

At its meeting held on Tuesday June 17, 2008, Cabinet considered the offer from ALCOA to sell its 10 percent shares in VALCO and decided to purchase the shares to add to the 90 percent shares the Government of Ghana already had.

The Government had proposed a concept of an integrated aluminum industry in which the country's bauxite will be mined, refined and processed to near-end or end products here in Ghana.

The concept is also linked to the railway system in Ghana which depends largely on the transport of bauxite for sustainability.

No petty trader will pay income tax in my next gov't — Maham...
10 minutes ago