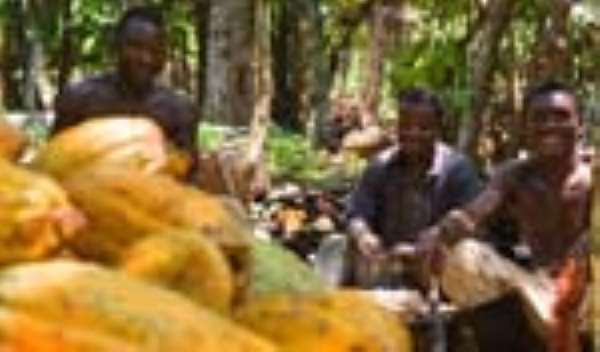 Ghana's 2007/08 main crop cocoa purchases as declared by private buyers to industry regulator Cocobod rose by 12.9 percent year-on-year to 663,558 tonnes, a preliminary tally released to Reuters by an industry source on Tuesday showed.

The main crop, which began mid-October 2007, was initially forecast at 600,000 tonnes, but hopes for a bigger crop have risen in recent months as weekly cumulative purchase figures have pulled ahead of year-ago levels.

Many in the industry have been predicting full-season output of 700,000 tonnes, including around 50,000 tonnes from the light crop which is tentatively scheduled to start on June 27.

Ghana has set itself an ambitious target to harvest at least one million tonnes of cocoa a year by 2010, mainly through increased use of fertilisers and adoption of high-yielding seeds, combined with improved farming methods.