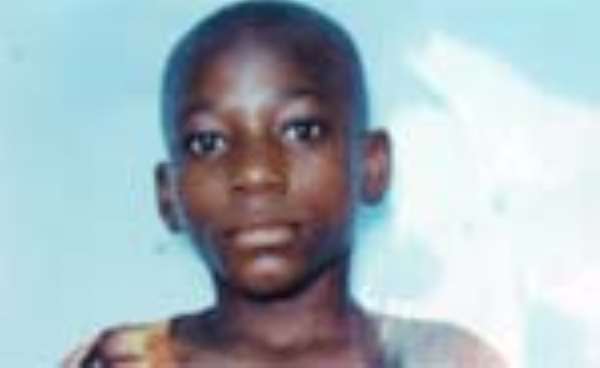 Two days after the death of Moses Tawiah Kassim, one of the victims of the Ashaiman riot, his parents do not know where his remains are.

They also alleged that no Police delegation has visited to commiserate with them.

An angry Alidu Kassim, stepfather of the dead class four boy told DAILY GUIDE yesterday that “no Police delegation has bothered to come and see us.

As I speak to you, we do not know where the remains of the innocent boy are and we are indeed pained”.

He told the paper that after waiting abortively for a Police delegation to come and discuss with them the burial arrangements for their son, “all we got was an invitation to come to the Police station.

We are treating the invitation with the contempt that it deserves; We won't go.”

He said he and his father-in-law had earlier gone to the Station, where they were told that the Police were holding a meeting after which they would call on the family. “It was a fiasco, as nobody turned up,” he said.

Alidu Kassim, 45, works as a security man with Nestle Ghana Limited in Tema.

The little boy, he said, was fond of him “as though he was my biological son. He told me that he would want to be a mechanic in future and that he prefers stopping school so he can start an apprenticeship, but I insisted that he completes first.”

Continuing to grieve over the boy's death, he said “I had a sleepless night as I continuously thought about him.”

Fresh reports filtering into DAILY GUIDE newsroom indicate that the little boy was shot in the head when he was stepping out of a public toilet.

A man who lifted the lifeless body then turned towards the Police Station and just at the threshold of the place, he too drew a Police bullet and dropped with the dead boy.

The family discounted earlier reports that the little boy was selling iced water.

The deceased's mother, a 38-year-old charcoal seller at Ashaiman, broke down in tears when a picture of her dead son was shown to her as it was being sold in the suburb.

On Tuesday hell broke loose in Ashaiman when commercial drivers called the bluff of the local police over the arrest of their colleagues.

In the ensuing melee, the drivers hurled stones at the police, who responded with live bullets, some of which hit little Moses and an adult.

Calm has however returned to the town.
The Tema Regional Police Commander, DCOP John Kudalor defended the action, saying it was in self defence.

The police virtually engaged the rioters in a street battle, with tear gas canisters and live bullets being fired at will to dislodge the irate protesters, who marched to the station on the rumour that one of the drivers arrested earlier had died in detention.

A number of vehicles parked on the compound of the station had their windscreen and other parts damaged by the time the hostilities were over.

After the deployment of more police personnel, the streets of Ashaiman were deserted and shops closed for fear of being arrested and looted.

I'm still on my galamsey stance, it hasn’t changed – Akufo-A...
16 minutes ago