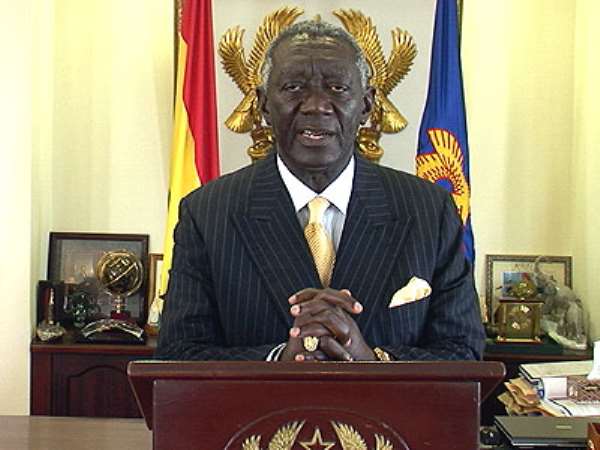 President John Agyekum Kufuor yesterday announced the Government's decision to reduce Excise Duty and Recovery Levy on gas oil, kerosene and marine gas oil as part of a package deal to bring relief to Ghanaians in the midst of the global challenges resulting from crude oil and food price hikes.

Additionally, debt recovery levy and excise duty on premix fuel as well as import duties on staples including rice, wheat, yellow corn and vegetable oil are to be removed.

In a nationwide broadcast, President Kufuor said the Government would also increase its support for the production cost of electricity, subsidise the cost of fertilizer and ensure effective distribution to farmers. He said he had directed the Finance Minister to urgently seek parliamentary approval for these to help to reduce transportation fares and food prices.

President Kufuor warned that it would be criminal for anyone to attempt to re-export items declared tax-exempt purposely for the benefit of the local market.

President Kufuor acknowledged that the trend was throwing the budget out of control and said although the measures would involve cutting down on some of the Government's development projects, there was not going to be any cut back on policies designed to protect the vulnerable in the society.

Among these are the school feeding programme; the capitation grant; National Health Insurance Scheme; the Metro Mass Transport; National Youth Employment Programme and the micro-finance and small loans scheme.

President Kufuor said to help to enhance the national food security the Government was in consultation with the country's development partners to import and stockpile additional supplies of rice and wheat.

He further outlined a number of policy interventions to strengthen the performance of the agricultural sector of the economy, saying, the Government was stepping up attention and investment and had directed the Reforestation Programme to increase the planting of foodstuff in the 'Tunja' demarcated areas around the country.

Again there had been a re-launch of the Aveyime Rice Project with the local farmers being encouraged to go into satellite farming in cooperation with the nucleus farm to boost local rice production.

Besides, the supply of tractors to farmers at subsidised rates and provision of small irrigation dams, improved seeds and ensuring best practices would be intensified while the implementation pace of the Millennium Challenge Account Programme in selected districts are accelerated.

President Kufuor said these needed the support of all sections of the society for effective and successful implementation. He, therefore, asked all to rally solidly behind the Government to ensure that the country went through the difficult times with minimal stress.

The rising crude oil and food prices had led to dislocation of economies, rioting and strikes in some countries.

President Kufuor said Ghana's economy had managed to withstand the terrible shocks of the market so far because of its strength and resilience and gave credit to the disciplined and far-sighted management of the economy over the past seven years by the Government backed by the Central Bank.

Debt cancellation through the highly Indebted Poor Countries (HIPC) Initiative freed the nation of indebtedness to the tune of about eight billion dollars from both bilateral and multi-lateral creditors.