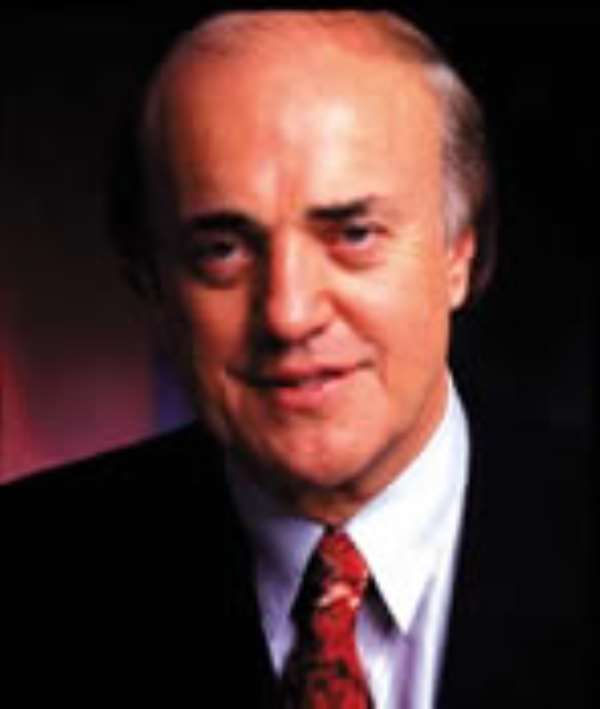 
Peter Arnett, a world renowned journalist, whose track record has been on war reporting, has stated that the dominance and influence of the international media is fast waning, and called on the local media to take advantage of the opportunity created by the new level of high confidence reposed in it by the people.

He challenged the media to endeavour to tell the people what they need to know but not what the international media say.

Mr. Arnett, a former CNN and AP news correspondent who won the admiration of many by being the only reporter to have carried out live report of the first Gulf War and filed close to 4000 stories on the Vietnam war, was delivering a lecture on "Journalism in a globalised world - prospects and challenges" organised by the Ghana Journalists Association, in Accra on Wednesday.

His passion for war coverage brought him into Ghana in the late 1990s where he used the country as a base to cover the Liberian and Sierra Leonean wars.

He said Ghana has a vibrant media and can produce media houses to join the emerging giants.

"Fifteen years ago, Ghana did not have much of a media as I visited the country," he recalled, adding that the future of the media in Ghana is bright.

Mr Arnett advised journalists that their reportage should always be factual as "it is the basis for all real reporting".

Giving an account of his interviews with the late Sadam Hussein and Osama Bin Laden, he decribed the interview with Bin Laden as bizarre.

"As I interviewed the giant Osama, with height above six feet, I noticed that he had placed his AK 47 next to him as we spoke," he said.

He said that interview did not really enjoy the public furore until after September 11 when the tapes were replayed, which portrayed a grand design by Osama to carry out the bombing of the World Trade Centre.

"On the contrary, a freer media is necessary as the journalist can choose to do what he is convinced is important," he emphasised.

The chairman for the occasion, Mrs. Gifty Affenyi Dadzie, former president of the GJA and member of the Council of State, called on journalists to endeavour to give the public the right information.

She appealed to the GJA to consider reviewing the guidelines for political coverage in this year's election which she described as a watershed in the country's political landscape.

Mr. Arnett, who is currently lecturing at the Cheung Kong School of Journalism Communication at the Shantou University, China, came into the country with nine of his students who are all doing stories on specific issues.

Akufo-Addo Has Turned Ghana Into 'Hell-Hole Instead Of Parad...
14 minutes ago