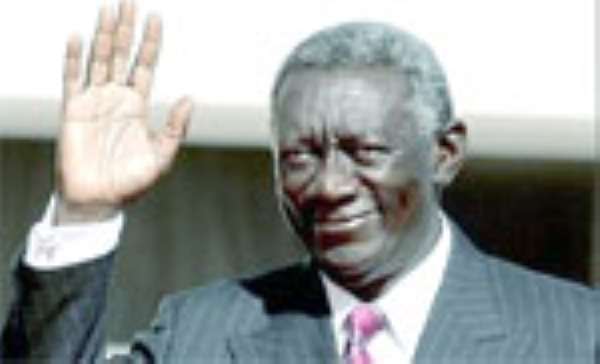 President John Agyekum Kufuor yesterday announced a five-pronged intervention to arrest the escalating global prices of essential commodities including petroleum products, which has hit the country in recent times.

The measures include the removal of import duties on rice, wheat, yellow corn and vegetable oil, worth over a billion dollars.

Presenting the measures in a nationwide address yesterday, President Kufuor said government is already in consultation with its development partners to import and stockpile additional supplies of rice and wheat to enhance food security.

Importers, the President has directed, should reduce prices accordingly to reflect the new arrangement. To ensure that miscreants do not abuse the relaxed tax regime by re-exporting commodities to neighbouring countries, doing so has been declared a criminal offence.

“Indeed, it should be a criminal offence to attempt to re-export these items which are being declared tax-exempt purposely for the benefit of the local market,” he warned.

In a major boost for the fishing industry, the President announced the removal of excise duty and debt recovery levy on premix oil, which would immensely reduce the cost of this source of protein in the country and enhance the lives of many fisher-folks.

The third line of action as announced by President Kufuor is the immediate reduction of the excise duty and debt recovery levy on gas oil, kerosene and Marine Gas Oil as a result of which dealers in the products and transporters are being directed to reduce prices and fares to reflect the gesture for the benefit of consumers and passengers.

In the area of electricity, it was decided that there should be increased support for the production cost of the supply so relief can be enjoyed by consumers.

Towards augmenting the food crop stock in the country and ensuring good harvest, President Kufuor stated that government will subsidize the cost of fertilizer, worth over $7million, and work to make for effective distribution of the agricultural input.

The foregone measure, he noted, would be enhanced by an agricultural sector which he said performed satisfactorily over the past year.

The performance of the sector has resulted in the reasonable availability of local staples like maize, yam, plantain, cassava and cocoyam.

To ensure further food security in the country, President Kufuor disclosed that government is stepping up attention and investments in the agricultural sector.

“In this regard, government is directing the management of the Afforestation Programme to increase the planting of foodstuffs in the TUONJA demarcated areas around the country,” he said.

Local farmers, he said, are being encouraged to go into satellite farming in cooperation with the nucleus farm to boost locally produced rice with a re-launched Aveyime Rice Project.

In another boost for agriculture, the sector ministry has been directed to increase its supply of tractors at subsidized rates to farmers.

To the Millennium Development Authority (MDA), the President urged them to accelerate the pace of implementation of the Millennium Challenge Account (MCA) programmes in all the catchment districts of the campaign.

He stressed that the mitigating measures need the support of all sections of the community for effective implementation, adding, “I am appealing to all of you to rally behind government to ensure that our society goes through these difficult times with minimal stress”.

Much as the announced measures will involve scaling down on some development projects, he gave the assurance that policies designed to protect the vulnerable in society will not be affected.

Such protected projects, he said, include the School Feeding Programme, the Capitation Grant, the National Health Insurance Scheme, the Metro Mass Transport system, the National Youth Employment Programme and the Micro-Finance and Small Loan Scheme (MASLOC).

The President, in giving a background to the measures, pointed out that severe phenomenal developments have been the underlying factors, some of which are traceable to natural causes and others to market forces.

He observed, “These are cumulatively generating turbulence with complex and far-reaching effects on practically all the nations of the world, including our own Ghana.”

The global trends, he averred, have led to the dislocation of economies, rioting and strikes, pointing at the just-ended UNCTAD XII where the UN Chief devoted copious time on the subject of the world food crisis.

The country's economy, he noted, has showed robustness and resilience in the face of the external shocks- a position mentioned earlier by the Governor of the Bank of Ghana in his first quarterly report on the state of the economy.

President Kufuor paid tribute to the Ministry of Finance and the Bank of Ghana for what he described as their able, disciplined and far-sighted management of the economy over the past seven years.

The resilience of the economy so far, he added, is also attributable to the stabilization of the national currency and rapid and substantial build-up of reserves which have increased the import cover from the low level of 2 weeks in the year 2001, to the current level of over 2 months.

The President's tribute did not leave out Nigeria, which he said provided a supplier's credit for the import of crude oil covering 30,000 barrels per day on a 90-day credit basis.

In an interview with DAILY GUIDE, Dr. Nii Moi Thompson, a renowned economist, explained that if the support is going to be a relief, it will not cushion the economy against the global external shocks.

“We need to implement long-term solutions to deal with this global upset than looking at a reprieve,” he said, adding, “Oil reached a new record of $135 on the U.S Mercantile Exchange yesterday, raising analysts' conviction that it could skyrocket to $200 by the close of the year.”

Dr. Thomspon advised government to find a suitable solution in addressing the increasing price change on the economy than looking at hedging which is a more risky business.

“The monies being given to Standard Chartered Plc to enter into an oil hedging contract- a process in which a buyer places a contract to buy the commodity at a fixed price from the seller when there is an anticipation of a rise in the price of a commodity in future, to help protect the economy against the soaring prices, should be used to support the National Development Planning Commission (NDPC) programmes,” he suggested.

Removal or reduction in taxes on petroleum products, he stated, will still not solve the increasing transportation prices since there will be a total of GH¢1 deduction when taxes are totally removed.

On his part, Mr. John Awuni, Director of Corporate Affairs of Finatrade Group, when contacted on phone, described as welcome news, government's decision to remove import duties on rice, cereals and petroleum products, saying the move would mitigate the efforts of the global increases in the price of crude oil and foods on Ghanaians.

He said importers should comply with government's directive to reduce prices to enable consumers enjoy the full benefit.

On the excise duty and debt recovery levy on Kerosene, Mr. Awuni contended that people in the rural areas would now heave a sigh of relief since according to him, they depend heavily on kerosene for daily activities.

Even as Ghanaians suffer from the pangs of the price hikes, the President offered words of consolation by pointing at what he said is the gift of providence through the recent oil find.

Pumping of the Ghanaian oil, he said, would commence in the next two years- an approaching feature which points at a silver lining in the clouds above the country.

President Kufuor a week or so ago summoned a Cabinet meeting to discuss the global price hikes after which a statement was issued, assuring Ghanaians that measures would soon be announced towards mitigating effects of the rising prices.